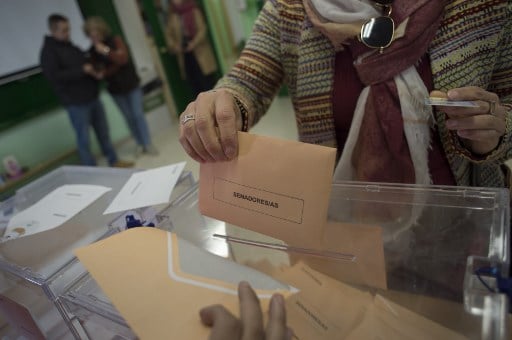 The general election held in Spain last weekend served as reminder that those who made their home in Spain but haven’t got Spanish citizenship don’t have a vote.

And with a UK election just around the corner it is particularly galling for those Britons who fall foul of the 15-year-rule and find that they don’t have a say there either.

It’s especially frustrating given that the December 12th general election will have a huge impact on Brexit on how it affects the lives of those living in the European Union.

So what do Brits in Spain feel about not having a voice? Would they rather have a say in the Spanish or British elections?

We asked our readers where they would like to have a vote, if they had a choice. Many felt that they would like to have a say in their adopted home because that is where they pay taxes and where the government affects their day to day life.

But although foreign residents are allowed to vote in local elections, a vote in regional and national elections is reserved for those with Spanish citizenship.

“I feel more at home in Spain and would like to think my vote could make a difference,” said Mary de lisle Lyle who lives in Murcia.

“Taxation without a vote isn't democratic,” insists Carol from Almeria. “Referenda apart, it would make more sense to have a vote in the country domiciled.”

“We live here it's home and always will be,” agreed Lynne Holden from Alicante.

“As a resident in Spain the government here affects my life more than the UK government,” said Rebecca Wey from Valencia.

Helen Johnston who has a home in Capellades, Catalonia said: “While I would very much like to vote in Spain, particularly in the present climate, I understand it is my responsibility to acquire citizenship in order to do so.”

Michael Brown who has lived in Asturias for 28 years said: “If a person has lived in a foreign country for many years it is more important to vote where he or she resides.

“Up to now, I have always felt that the government of my country of residence has had a greater bearing on my life than that of the UK.”

Elizabeth Marjorie Oliver from Los Montesinos added: “Having lived in Spain for 13 years I feel I think it would be good to have a say as we do in local elections.”

And Carole Patton who has lived in Spain since 1979 said: “If I live and work here, own a house, am married to a Spaniard and have 2 children, and therefore pay all my taxes in this country, then I think I should have the right to decide which party is best for taking these vital decisions.”

Bernard Mark Newton, who lives in Marina Alta on the Costa Blanca, feels the same way: “I have lived in Spain permanently since 1997. I pay tax to the Spanish treasury. I should have the vote here”. “Given the option I would choose to vote in the national elections of the country where I live, again because the result also affects me and my daily life directly,” said Eric J. Gates.

Tracy Doran who lives in Sant Cugat del Vallès, Catalonia said: “I should have a say in the society I contribute to.”

For some people though, having the right to vote in Spain’s national elections isn’t important.

“I do not understand the Spanish system,” confessed James Davidson Turnbull who lives in Almordi. “And although I am resident I believe it is the Spanish who should decide their rules and I will obey them.”

Asked to choose between a vote in the UK or a vote in Spain the majority of the readers who responded said their priority right now was to vote in the UK because the December 12th election that determine the outcome of Brexit.

Given the enormous ramifications Brexit will have on the lives of those Brits who live in Europe, many felt that they really ought to have a say in the elections “back home”.

'Brexit is the game changer'

“At the present time, Nov 2019, I want to be able to influence (cancel) Brexit. But in general terms, my day to day is in Spain,” said Roy Thompson from Catalonia. But because he has lived outside of the UK for 25 years he has lost the right to vote in the UK, a fact that that makes him “feel sick, useless and completely voiceless”.

“In normal times I'd say I'd like to vote in Spain, however right now the UK is in the grip of a rightwing extremist group of fanatics who have taken control of the Conservative Party, and therefore if I could choose I would vote in the UK as I believe the need is greater there at the moment,” insists Steve Eleftheriou who has lived in the Tarragona province for 21 years.

“We still rely on pensions and health in Spain so if Brexit changes this it would be a disaster for expats so they should be able to vote as still affects their life in a big way,” said Shirley Stott from Andalusia.

William Donaldson from the Canary Islands added: “Without Brexit I would have chosen the Spanish option. Brexit the game changer puts a new slant on things.”

“In a perfect world we would all be allowed to vote in the country in which we are permanently resident. In this absence I am furious that this election in the UK will probably be the last in which we can vote because of the 15 year rule,” said Deborah Booth from Galicia who will be casting a proxy vote in the UK

“This year yes , because of the vital nature of this particular election, to stop the idiotic Brexit, and to stop fascism creeping in unnoticed into UK,” she said.

“Until you become a citizen of another country you are still British and therefore should be allowed to vote. Many of us have close relatives living in Britain and we care about their lives there,” insists Judith Hobson from Oviedo.

Why not both countries?

Many readers thought the fairest thing would be to vote in both countries.

“Both! Decisions in both affect me,” said Elaine Jones who lives in Ronda.

Agnes Miller who lives in Alicante province said: “I very reluctantly chose Spanish. But I don't believe it should be a binary choice.”

“Why not vote in the UK because I'm a citizen and in Spain because I pay tax there? At present I can only vote in Spain if I become Spanish, giving up my UK citizenship.”

Many, however, find that they don’t have the right to vote in either, and that is really hard to swallow.

Martin Roberts who lives in Madrid summed up the frustration of being disenfranchised  after living outside the UK for more than 15 years.

“Voting is the most basic right of citizenship in any self-respecting democracy, and should not be curtailed merely because of where someone chooses to reside, for that would violate another definition of a free society, which is freedom of movement. Currently, millions of British citizens have been stripped of voting rights, putting us on a par with convicts and the certifiably insane. This is not only unfair, but patently absurd.”

Next week we will publish readers’ views on being denied the right to vote under the 15-year rule.