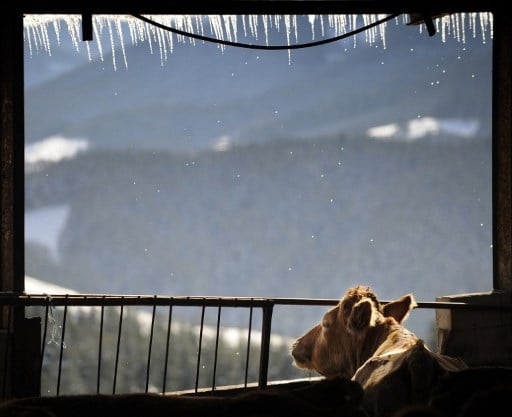 File photo of a cow in the Basque Country looking out over a frost. Photo: AFP

It’s time to pull out the winter coat, wrap up in hats and scarves, and discover the joys of Spanish hearty stews as winter truly gets under way.

A large low pressure weather system will sweep across the peninsular to bringing strong winds, nightly frosts and precipitation which could be snow for those in the hills.

Ruben del Campo, spokesman for the State Meteorological Agency (Aemet) warned that full on winter will return from Thursday and that by Sunday, temperatures will be between 4C and 10C lower than is typical for mid-November.

“Thursday will see storms that mark the arrival of a cold front bringing wind and adverse weather,” he said. “Temperatures will continue to drop on Friday and into the weekend.

The north of the peninsular will see maritime storms as wind whips up the seas with heavy precipitation expected in Galicia, Asturias and Cantabria and the northern parts of Castille-Leon and heavy snowfall of up to 30cm in mountainous parts.

He predicted that rain would be seen across the peninsula, with the exception of Almeria, Murcia and the Valencia regions.

He warned that Friday would see wintry temperatures. “A good part of the country will see highs that are 10C lower than typical for this time of year. There will be widespread frosts across the plateaus and mountain areas and strong winds.”