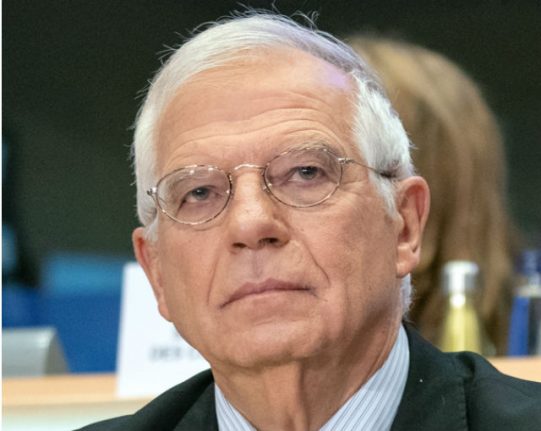 Josep Borrell is set to become the EU's foreign policy chief: Photo: Wikimedia Commons
The document, not meant for public release, related to a Spanish request for the arrest and extradition from Britain of a Catalan politician, Clara Ponsati, who holds an academic post at a Scottish university.
It contained a British query, made through an EU police cooperation database for the Schengen free movement area called SIRENE, asking for more information to support the Spanish warrant and revealed some of Ponsati's personal data.
Borrell posted it to his Twitter account on Wednesday and later deleted it — but not before its was screengrabbed and triggered a complaint from a Catalan MEP, Diana Riber, who demanded Borrell be barred from taking up his job as the next EU High Representative for foreign affairs.
A spokeswoman for the European Commission told reporters Friday that “there are very clear rules in place regarding access to and use of the Schengen Information System… and we would expect that everyone shall respect the letter and spirit of these rules, notably any confidentiality requirements.”
The spokeswoman, Mina Andreeva, also said it was a Spanish matter and should not affect Borrell's future post in the Commission.
“This tweet was posted by Mr Borrell in his capacity as acting foreign minister. It is now for the national competent authorities to look into this matter,” she said, passing the buck to Madrid.
'Fines' if rules broken
A British spokesman for the SIRENE database in the UK told AFP the information in it was meant for law enforcement and judges, and was “not generally public”. He added that, as Spain issued the warrant, it was up to Madrid to decide if any rules about publication of the UK follow-up to it were broken.
A Commission source speaking to AFP on condition of anonymity said “Spanish authorities must verify if Borrell had the right to receive such information”.
“The rules provide for fines for the publication of confidential documents” from the Schengen database, the source added.
Borrell, 72, is to become the EU's top foreign policy official in the next Commission to take office under incoming president Ursula von der Leyen.
That new administration was meant to have started work this month but has been delayed by at least a month because other nominated commissioners failed to clear confirmation hurdles in the European Parliament.
Spain's European arrest warrant against Ponsati is part of Madrid's crackdown on what it views as “sedition” by separatist Catalan politicians whose bid to seek independence for their region has been roughly put down by the Spanish government.