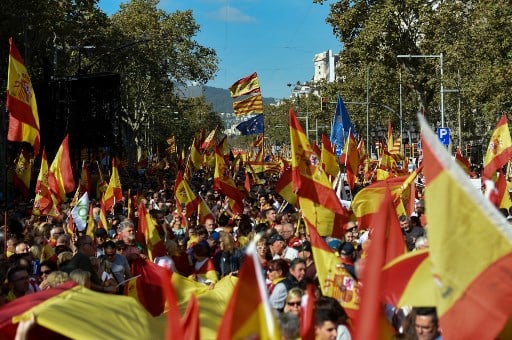 Most people in Catalonia do not agree with the separatist movement and want to end the protest violence, the Catalan Civil Society (SCC) head has told AFP, ahead of a major demonstration by the so-called “silent majority” in Barcelona on Sunday.

The platform, which is headed by Fernando Sanchez Costa, represents Catalan “remainers” — those who would rather this wealthy northeastern region stay part of Spain. This region of 7.5 million people remains sharply divided over independence, with a regional government survey last month showing 44 percent in favour of separating from Spain but 48.3 percent against.

“Those who oppose independence are a majority, and that is an important message for Catalonia, for Spain and the world, where often separatism is associated with Catalonia,” he told AFP.

He was speaking on Sunday as tens of thousands of people marched for Spanish unity, staging a counter-rally in Barcelona a day after 350,000 Catalan separatists held a protest over the jailing of nine regional leaders. Demonstrators hold a banner reading “together we are stronger, for a Spain without fractures” during a demonstration called by the anti-separatists organisation “Societat Civil Catalana”. Photo: AFP

Around 80,000 people, according to a police estimate, marched down Barcelona's central Gracia thoroughfare waving Spanish and Catalan flags and chanting “that's enough” and “the streets belong to everyone” to counter the separatist claim that “the streets will always be ours.”

Xavier Dalamantes, a 40-year-old working in the pharmaceutical industry who attended Sunday's rally with a Spanish flag draped over his shoulders, told AFP that the time had come “to get out there and say what one thinks — they (the separatists) are trying to turn Catalonia into a totalitarian state.”

Sunday's protest coincides with the two-year anniversary of the Catalan parliament's abortive declaration of independence that triggered Spain's worst political crisis in decades, with Madrid suspending the region's autonomy, sacking its government and prosecuting its leaders.

Following a high-profile trial, the Supreme Court jailed nine Catalan separatist leaders on October 14th, triggering a wave of unrest that has left the region gripped by “a climate of fear which we have not seen in Barcelona or in Spain in decades,” Costa said.

“It's important to go back out and say: that's enough violence and confrontation.”

Since the failed independence bid of 2017, most people had realised that the possibility of separation was unrealistic, he said.

“No one in Catalonia believes anymore that the possibility of independence exists. The majority of the separatist camp accepts that we have to enter a new stage and that the unilateral path (to independence) is not possible.”

But current regional president Quim Torra and his predecessor Carles Puigdemont were “determined to maintain the confrontation and tension” whether out of conviction or for electoral reasons, Costa said, warning it was causing a
lot of damage to Catalan society.

“Don't insist on the politics of confrontation, which is hurting us so much,” he said.

“We must listen to the social majority in Catalonia that opposes independence, whose emotions are also running high.”

Dialogue was crucial, he said.

“Let's talk especially within Catalonia, and listen to that Catalan majority which is not separatist and which feels very removed from Catalan institutions.”

Both the Spanish government and the regional authorities in Catalonia needed to do some soul searching with respect to plurality, he said.

“We all have to make an effort to build the Catalonia of the future.”