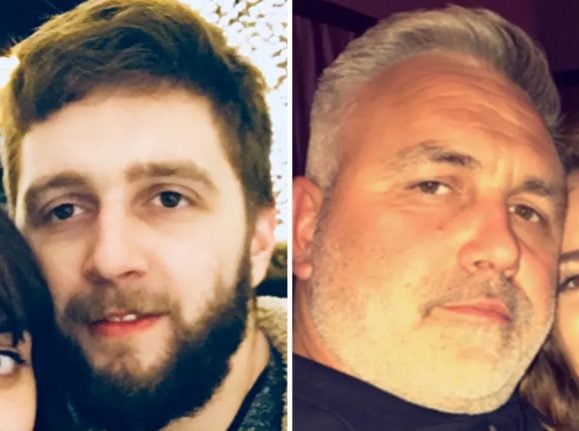 Daniel Poole, 46, and his son Liam, 22, from Burgess Hill, Sussex, went missing from their hotel in Estepona in April and their family suspect that they were shot dead and dumped in the Mediterranean.

A new documentary reveals that the father, has previous convictions for drug dealing and is linked to the Richardson crime family from south London, a gang with a reputation for torture.

Kathy Catney, 63, from Horsham, Sussex, the grandmother of Liam Poole, told a BBC investigative team that her former son-in-law Daniel may have been travelling to Spain to carry out a drugs deal which went wrong.

“I do think Liam’s died. I think he’s been killed .. where ? I hope he’s not at the bottom of the sea .. I hope. People say he is but I want the chance for people to give him back to me,” she says in a documentary to be broadcast on Monday evening.

“I think (Liam's) dad got into some bother and whoever he got into bother with decided to do payback and Liam got caught in the crossfire. That is what I think and both have been shot. I know Liam's not alive.”

“I knew (Daniel) had done time for drugs because he was with my daughter at that time. We always suspected he was up to no good but again we just didn’t ask questions,” she said.

“I knew he was going to Spain to meet up with somebody to do some sort of deal. Whether that was property or drugs, I really didn’t know.”

Sussex police are liasing with Spanish police to investigate the disappearance of the two men who appear to have vanished into thin air while ostensibly on a golfing trip to the Costa del Sol.

Despite repeated appeals, there has been no sign or news of the pair in more than six months.

Can you help us reach people who were in #Malaga around 1 April?

Lauryn's father and brother have made no contact with home since this date.

The father and son were last seen driving in a Peugeot 308 hire car near the Valle Romano hotel in Estepona on April 1st. Their passports and baggage were later found in the hotel room and the car later recovered by police.

But the family claim that the day after they vanished, they received a ransom demand for 100,000 pounds.

“All I was told was Morocco. We got a phone message to say that there is a ransom come through for GBP 100,000 and within this three hours we’d raised that GBP 100,000 but nothing materialised,” she said.

Ms Catney has appealed for anyone with any information to contact the police.

“Just please, please pick up the phone and just phone police. You don’t have to give your name just tell us what happened to Liam and his Dad,” she said.

The family's testimony was featured in Inside Out with Glen Campbell on BBC One, 7.30pm tonight  on Monday 21st October.

Liam Poole, who disappeared with his son Daniel, had a string of drug related convictions.

“I knew he was going… to meet up with somebody to do some sort of deal. Whether that was property [or] drugs I really didn't know,” Daniel’s grandmother said.https://t.co/VP3wOoKzdf

READ ALSO: Have you seen these fugitives? They could be hiding out in Spain