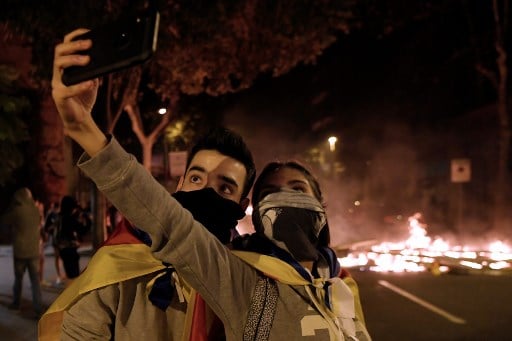 For the third consecutive night Barcelona saw outbreaks of violence as protesters clashed with police, setting fires in the street and throwing projectiles in anger at the Supreme Court sentencing of Catalan separatist leaders.

Disturbing images of unrest have left tourists wondering whether it is safe to visit the city.

On Wednesday night alone, more than 50 separate fires were reported in downtown Barcelona, including at least 12 cars that had been set alight.

Overall there were 33 arrests during the night and close to 100 people were treated by emergency medical teams, including 30 police officers who were injured during the clashes.

Makeshift barriers had been set up across streets in central Barcelona and rubbish containers set on fire. Spanish TV showed one resident running from a burning building with a young baby in his arms.

University students across Catalonia have begun a strike, staging sit-ins at campuses with around 25,000 striking students and their supporters took part in a midday rally outside of Barcelona city hall, according to municipal police.

Meanwhile roads across the region are regularly blocked with blockades and transport lines have been disrupted.

Mass demonstrations have been called for Friday to coincide with a general strike planned across the region and on Wednesday people from outlying towns formed groups to march on Barcelona in a mass protest planned in the Catalan capital for Friday evening.

What happened to peaceful protesting?

The violent protests marked a break with the mainly peaceful and festive pro-independence rallies held in Catalonia since the separatist movement gained momentum nearly a decade ago.

While Catalan president Quim Torra has sanctioned and even encouraged civil disobedience, his government is also responsible for the regional police who are charged with controlling demonstrations, putting him in an uncomfortable position.

Torra had not commented on the unrest for days, but overnight he called for an immediate halt to the violent clashes.

“This has to stop right now,” he said.

“There is no reason or justification for burning cars, nor any other vandalism. Protest should be peaceful.” The UK Foreign and Commonwealth Office (FCO) have issued travel advice warning that  “further gatherings and demonstrations are likely to take place” and that visitors “should exercise caution in the vicinity of demonstrations as they may occur with little or no warning”.

This warning is echoed by the US Department of State, which advises visitors to “avoid the areas of the demonstrations”, “be aware of your surroundings”, “keep a low profile” and “notify friends and family of your safety”.

Find out about the latest hotspots

This map shows where protests are taking place in realtime:

Barcelona Tourism has launched a telephone line for those tourists that have missed their flight or couldn’t make it to their hotel: +34 93 285 3834.

On Monday, the first day of the protests, action was focused on El Prat airport with roads around it blocked and buses and trains disrupted. More than 100 flights had to be cancelled after protesters stormed in the airport and thousands of travellers were stranded.

Ugly clashes ensued with riot police firing rubber and foam bullets into the crowds of protesters.

Since then, police have boosted their presence at the airport and prevented further disruption but it's worth checking on the status of your flight before you head to the airport and leave plenty of time to get there. Trouble can flare up very quickly and most people will want to avoid getting caught up in the protests which can turn suddenly violent.

Some people however, see the protests as a great opportunity for a photo shoot.

Tourism chiefs have expressed concern that tourists will be put off from visiting Barcelona. The hotel association Gremi, warned that the “very serious” incidents are “damaging  Barcelona's reputation” and “can lead to a serious direct impact on tourism revenue”.

“We respect the right to protest,” said “but these should be made in a spirit of coexistence, peacefully and without causing civil unrest.”