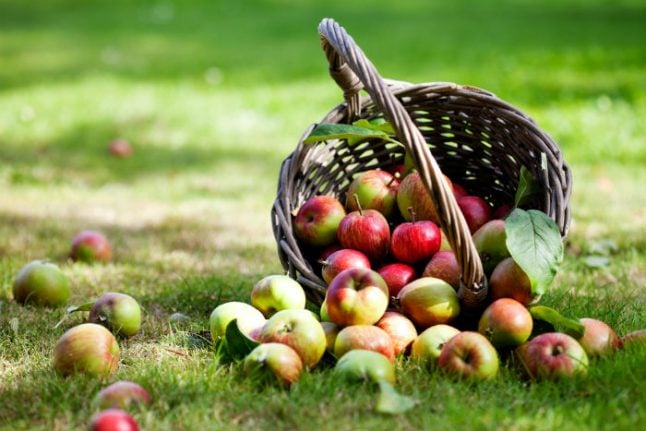 The arrival of September/October meant our first winter in the northern hemisphere was almost upon us. Autumn/winter in Sydney means putting on socks, and swapping your t-shirt for a long-sleeved t-shirt. Maybe a scarf, if you’re going to the footy. Our cheerful Aussie mantra: “She’ll be right” was, perhaps with hindsight, naive.

Major renovations progressed; the ground floor took shape as a home, with a new bathroom, kitchen and an electricity supply that allowed us to switch lights on and off without potentially lethal consequences. I almost missed the random bangs and puffs of smoke when something shorted.

We transformed the gothic dining area into a light, bright vestibule with a quick paint-job and some decent lighting. It no longer looked like the stage set for “Fall of the House of Usher”. The mural of a medieval pageant in the bathroom (I kid you not) was gone. Replaced with Spanish tiles. We treated ourselves to one little luxury – a chestnut-wood four-poster bed, which was made by our carpenter, Lee. This became our island of sanctuary each night, when we’d wade through rubble asking: “Will this house ever actually be finished?” The dog and cat retreated to this platform of sanity with us. So, there we were, our little family, on our raft, adrift in a sea of dust.

As the long, hot, dry summer that we found so comfortingly familiar ended, we were surprised by the tranquillity of autumn. It gradually wafted over the landscape like a chiffon curtain. In local fields root vegetables were dug up, grapes harvested, apples picked, bonfires lit.

We applied online for our permit, which was easy, then lit up. It was spectacular! All the dead ivy and wisteria, the weeds and undergrowth that the team had cleared, all the wood-worm-raddled wood they had ripped out of the house, the old kitchen; all of it blazed in the garden. We poked at it with long sticks, like fascinated children, and smelled like kippers all of the next day.

In our third-of-an-acre field a small orchard had been planted. There were two large trees and one small tree, all heaving with fruit, and I wondered what I could do with all those apples. Our local supermarket in Sydney sold apples for 90 cents each – nearly $5 a kilo (3 euros). I calculated (accurately, it turned out) that our few trees bore around 40 bushels. That’s over 800 kilos! More apple pie/crumble/jelly than I could ever make and store. Everyone else in the neighbourhood had the same bounty, so selling it was not an option. I wondered what the neighbours did with theirs.

One misty morning I looked over the fence and spotted the answer: “El Basco” the local cider-maker, and his team, were picking my neighbour’s fruit. Quick chat, then he and his guys stripped my trees bare. This flamboyant Basque character, with his impressive moustache, and cider-barrel chest, said he would bring produce in payment for the fruit.

He delivered twelve litres of cider, and four litres of vinegar. The best cider I have ever drunk; a floral bouquet and tiny champagne-like bead that prickled the tongue. It was satisfyingly alcoholic. The vinegar was pretty good too. I used it to make chutney and pickles from the rest of the produce my neighbours gave me, and some of my own apples. Such produce! Enough organically-grown squash, pumpkin, zucchini and tomatoes to fill a wheelbarrow. Our fig tree was decked with sticky sweet fruit, so after we’d gorged on fresh figs with goat’s cheese, I made fig jam, and a huge pudding for the boys, served up hot, with chilled local goat’s milk yoghurt. Happy boys! The fig jam gave us fits of the giggles though, which puzzled the boys: it means something quite different back in Aus. It’s an acronym, used to disparage cocky, vain people (“F*** I’m Good. Just Ask Me!”) There’s a book on these cultural differences just waiting to be written. And don’t mention thongs.

The infamous Galician rain began to fall gently on surrounding stubbly fields that had been scorched all summer by the sun. Mornings were cloaked in mist. Birds from further north arrived, and sang in the hedgerows. Unfamiliar tunes. I saw my first Robins since I was a small child, the little heralds of Christmas, which was 58 days away. There was the promise of some truly frigid weather to accompany the festivities, so we filled our new concrete woodshed with a delivery of well-seasoned chestnut and oak. The morning temperatures dropped to single figures prefixed with a minus. We bought hot-water bottles to warm our feet at night. The dog and cat claimed an armchair each, and enjoyed the snuggly warmth of the wood-burner, ‘til it wouldn’t draw at all, then began to spew toxic, oily smoke when we lit it. The flues were blocked solid, packed tight with years-worth of tarry soot. Inadequately insulated, poorly-installed chimneys that had to go. Another addition to the list of essential repairs which began to take precedence over cosmetic renovation, and set us back in both time and budget. And I thought it would be all about matching rugs to cushions and accessorizing bathrooms. Our friend’s husband Manuel saved the day. Two new wood-burners and the right type of flues were installed in double-quick time. He also helped us to apply for a grant from the Xunta to cover some costs.

We bought the dog a smart new quilted coat in chocolate brown. The cat simply decided to gain weight to combat the cold, and began to demand five meals a day. She developed a penchant for dog-food, the really cheap stuff we fed to the three local pooches who adopted us. For thirteen years she would eat only two flavours of her favourite “Fancy Feast”, now she tucked into “Amigo” like it was poached salmon. Bloody cats!

We got used to carrying logs in. The additional exercise was welcome. Hearty Galician food is carb-heavy! In Australia, we simply pointed the remote and pressed a button to activate A/C or heat. This fire-making was all very new to us. Conversations in cafes had turned to how people were preparing for the oncoming cold. In parts of Asturias and Cantabria there was some snow. We awoke to the glitter of frost each morning. Maybe our first Galician Christmas would be white?

There is no Galician version of chutney, I discovered. When I asked my neighbours, a truly local mother and daughter who are wonderful cooks and country-women, they were bemused by the idea of it. The closest they could come up with was an “ensalada picante”. I gave them a jar of this recipe, and they loved it. It goes very well with most of the wonderful cheeses of Galicia, particularly a “semi-curado” cheese. *Personal tastes differ but I find that the following  ratio works best for my palate: for every 300g fruit use 100g sugar and 100ml vinegar.

600g/a rough half kilo of apples peeled and cored, cut into small pieces (sprinkle with lemon juice and a little sugar to stop browning)

Tsp green or pink peppercorns (black will do)

Juice of half a lemon Place vinegar, sugar, lemon juice and salt into a deep, wide pan or jelly pan if you have one.

Bring to the boil and let it roll for a couple of minutes to take the edge off the vinegar. Add the bay leaves and all of the spices, then reduce to a simmer.

Add the apples and sliced onion to the pan and stir well, making sure everything is coated. Bring back to the boil for about 2 minutes, then reduce to a very low simmer again for 45-60 minutes, uncovered. *If the mix gets a bit dry you can add some water to loosen it up.  Remove from heat. Remove cinnamon stick, juniper, and bay leaves.

Fill pre-warmed sterilized jars and cap with lids. Label when cooled. It’s best to keep this for a few weeks before eating, to let the flavours develop in the jar. But I have been known to eat it still warm on toasted cheese! Keep in the ‘fridge after opening. 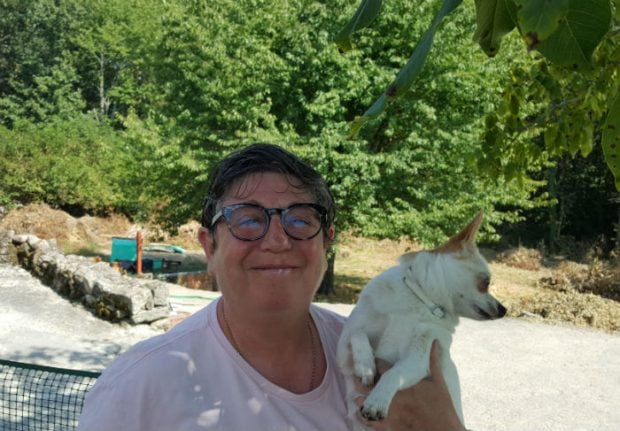 GALICIA
An Aussie in Galicia: Work to transform our tired neglected house begins in earnest 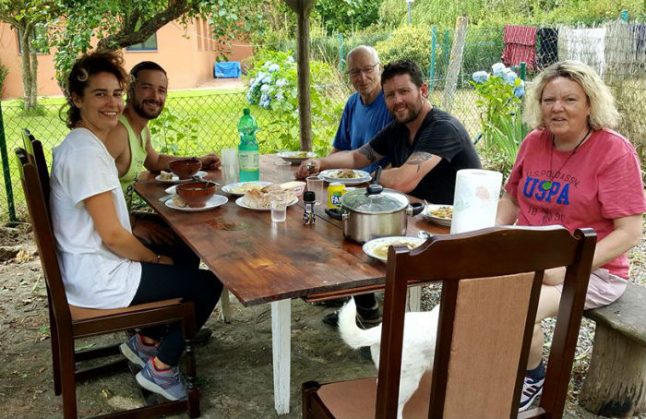 GALICIA
An Aussie in Galicia: How free labour helps transform a renovation project

GALICIA
An Aussie in Galicia: Work to transform our tired neglected house begins in earnest