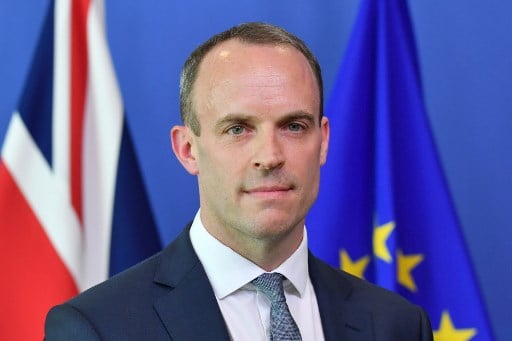 Dominic Raab has penned a letter to UK nationals in Spain in which he tells them how they should be preparing for Brexit as the UK government gets ready to deliver the “will of the British people” on October 31.

His letter reads like a set of demands for Brits in Spain – “you'll need”, “you must”, “you should” – in return for only vague promises about UK nationals' rights in their host country post-2020.

Although Raab assures his target audience that in the event of a no-deal Brexit they will continue to have access to healthcare in Spain “exactly as you do now, until at least 31 December 2020 if you are an S1 form holder”, there is no mention of the worry and anxiety that's been caused to them over the past three years, or what is likely to happen to their healthcare after that date.

Instead the UK Foreign Secretary repeats much of what's already been announced by the British Embassy in Spain, choosing to round off his impersonal letter by saying

“This is an exciting time, but also one of unprecedented change”.

“We’re getting ready for Brexit on 31 October, and I would urge you to do the same”.

Sue Wilson of Bremain in Spain has responded to Raab's tactless comments by telling The Local: “Brexiter Raab might think this an exciting time, but I can assure you, we do not!

“More appropriate adjectives to describe our assessment of the current state of play would be “terrifying” or “unsettling”. Promising that our rights and benefits are protected for a limited period does not provide reassurance. Rather, it has Brits in Spain worrying what will happen when that period expires?

“Those hoping for a deal, any deal, to get us out of this awful limbo, are now starting to realise that even a Brexit deal will not see the end of this awful uncertainty”.

Raab even found the time to praise the “the largest information campaign in British history” – the Get Ready for Brexit  campaign – as if to imply that this was of importance or helpful for UK nationals in Spain who still don't know what their future holds.

The full letter reads as follows:

In less than a month, the will of the British people will be delivered and the United Kingdom will leave the European Union. This, of course, will be a time of transition. But for those living in Spain, I want to assure you that as Foreign Secretary, I am working to ensure that your rights and access to services remain as strong as ever.

From Madrid to Malaga, and Barcelona to Benidorm, 300,000 Britons have made Spain their home. No matter the terms of our departure from the EU, you will continue to be able to live and work in Spain.

But to make sure your daily needs are met, there are some steps you must take to get ready for Brexit on 31 October.

You’ll need to register for residency, check your healthcare cover, verify your passport validity online and exchange your UK driving licence for a Spanish one. To check the specific actions you need to take, and stay up to date, go to the Living in Spain Guide at gov.uk/livinginspain.

In Government, we are doing our bit to get ready for Brexit, too. We are making sure that on 1 November, every British national living in Spain can go on living, working, studying and accessing healthcare.

OPINION: I moved to Spain expecting free healthcare for life

We are working with the Spanish authorities to make processes as smooth and straightforward as possible, whether you’re applying for residency or a new driving licence.

And we are working with the Spanish National Health System, SNS, to ensure that tourists, students and European Health Insurance Card (EHIC) holders will be able to access healthcare in the same way until at least 31 December 2020.

READ MORE: Healthcare in Spain after Brexit – What you need to know We are working hard to reach a deal with the EU. But even if the UK leaves without a deal, the UK and Spain have each taken steps to ensure you will be able to continue accessing healthcare in Spain, exactly as you do now, until at least 31 December 2020 if you are an S1 form holder.

Of course, every circumstance is unique. And we know that some British people might need some extra support during this transition.

We want to support those who may find it harder to complete all the paperwork – like pensioners or disabled people, those living in remote areas, and those needing assistance with language translation or interpretation.The Foreign Office has allocated an extra £3 million for charities and other voluntary organisations to help these people keep their rights and access to services in the EU. You should be checking in regularly with the Embassy in Madrid or local consulates in Alicante, Barcelona, Ibiza, Las Palmas, Malaga, Palma de Mallorca, Santa Cruz de Tenerife, for information on upcoming local ‘question and answer’ sessions, town hall meetings and information stands in supermarkets and on high streets.

And by now, you should also be seeing one of the largest information campaigns in British history, which launched with advice in newspapers and on billboards, encouraging people across the UK and Europe to Get Ready for Brexit.

This is an exciting time, but also one of unprecedented change. We’re getting ready for Brexit on 31 October, and I would urge you to do the same.