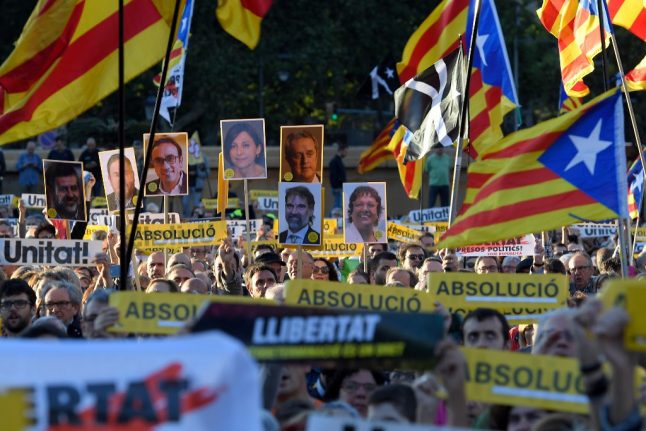 Setting aside their divisions, Catalonia's pro-independence parties on Thursday adopted a clutch of motions granting legitimacy to “civil disobedience”, demanding the withdrawal of Spain's national police from the wealthy northeastern region, and calling for an amnesty for the leaders soon to be judged by the Supreme Court.

The move came on the same day that seven Catalan separatists suspected of preparing violent attacks were charged with belonging to a “terrorist organisation”.

Although the declarations by the Catalan parliament are purely symbolic, given it does not have the authority to make such decisions, the central government in Madrid hit back on Friday, saying it would take legal action.

“This government is not willing to accept any attack… on the constitution,” warned government spokeswoman Isabel Celaa following Friday's cabinet meeting.

Such declarations by the regional government bear a worrying similarity to similar motions passed ahead of the failed independence bid on October 1, 2017, that triggered Spain's worst political crisis in decades.

“It's evident that the parliament set in motion the start of its strategy of confrontation yesterday” as called for by former Catalan president Carles Puigdemont “which is going to result in more tension”, Marius Carol, director of the La Vanguardia, Catalonia's leading daily, wrote in an editorial.

Puigdemont fled to Belgium after the failed independence bid to avoid prosecution and keeps a strong hold over Catalan politics from there. Monday's arrest of a group of radical independence activists gave an unexpected boost to the separatist movement which has been struggling recently to mobilise the street.

And the police operation took place just a few weeks before the Supreme Court issues its verdict against the 12 separatist leaders following a high-profile trial.

According to historian Joan Esculies, “the independence movement is divided… it doesn't have a shared strategy” as it had back in 2017 when it organised an independence referendum that was banned by Madrid and a vote on secession by the Catalan parliament.

But “they can reach agreement when faced with what they call repression” by the central government, he told AFP.

“It's very easy for them to show a common front and display a certain amount of unity” even if politically, the divisions are still there between those who want dialogue with Madrid and those who want confrontation, Esculies said.

On Thursday, seven of the nine activists arrested earlier in the week were placed in provisional detention for “belonging to a terrorist organisation”, according to a statement from Spain's National Court.

Announcing their arrest on Monday, police said investigators had found “material and substances which could have been used for making explosives”.

But Quim Torra, the region's pro-independence president, said that in arresting them, the Spanish state had wanted “to establish a violent narrative ahead of the verdict” of the 12 separatists on trial.

The use of violence during the 2017 crisis has been at the heart of the case against them because it is a key element of the charge of rebellion that they are facing, which carries a very heavy penalty.

The separatists have always stressed the peaceful nature of their movement.

Torra's remarks drew a sharp retort from Pedro Sanchez's Socialist government, which has repeatedly been accused by its opponents of showing weakness in respect to the pro-independence movement.

“He must make clear his respect for the laws of democracy and the principles of the state of law,” she insisted.