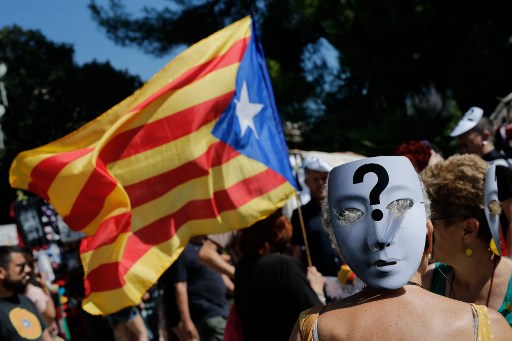 The suspects were being held on charges of “rebellion, terrorism and possession of explosives” for an attack planned for the coming weeks which could have caused “irreparable damage”, the prosecution said in a statement.

The arrests come just week before the second anniversary of the banned Catalan independence referendum which triggered one of Spain's biggest political crises.

Police searched the region and particularly the city of Sabadell, 25 kilometres (15 miles) north of Barcelona, and found “equipment and substances considered to be used for the manufacture of explosives,” Spain's Civil Guard
said.

Spain's High Court ordered the arrests to shed light on “alleged criminal activities” planned by a radical separatist group, the Committees for the Defence of the Republic (CDR).

The group was created during Catalonia's failed bid for independence in 2017 and its members are known for blocking off main roads and clashing with police.

The CDR said on its Twitter page it denounced the “indiscriminate searches and arbitrary detentions”.

The search operation comes ahead of a verdict next month in the trial of 12 separatist leaders for their roles in the attempted secession in 2017.

Alleged violence in 2017 was a key focus of the trial, in which the separatist leaders defended the peaceful nature of their movement.

“They are trying again to build a narrative of violence before the verdict. They will not succeed,” Catalan regional president Quim Torra tweeted.

“The independence movement is and will remain peaceful,” he added.