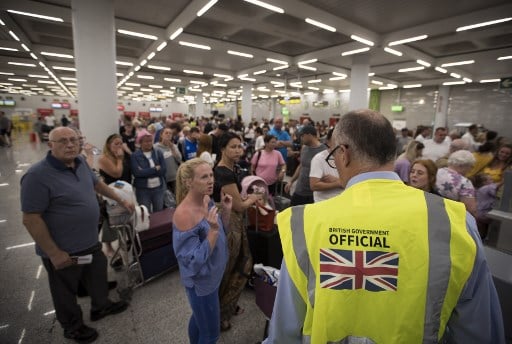 Half of the flights had Spanish airports as their destination, whereas the rest were due to take off from Spain, a spokesmand for AENA said.

Thomas Cook announced at 2am on  Monday morning that it would cease trading after talks failed to produce a funding lifeline for the ailing travel company, the oldest in the world. More than half a million holidaymakers are said to be affected by the collapse, many of whom are already on the holidays and will find the journey home disrupted.

Others will see future holidays called off with the promise of full reimbursements.

The collapse of Thomas Cook will cost 9,000 British jobs and spark the biggest repatriation effort seen since the Second World War.

“The British Government has asked the UK Civil Aviation Authority to launch a repatriation programme over the next two weeks, from Monday 23 September to Sunday 6 October, to bring Thomas Cook customers back to the UK,” read a statement issued by the British Embassy in Madrid.

“The Civil Aviation Authority has secured a fleet of aircraft from around the world to fly passengers back to the UK.  It is also contacting hotels accommodating Thomas Cook customers as part of a holiday package to let them know that the cost of the accommodation for these customers will  be covered by the ATOL scheme.”

The Civil Aviation Authority has launched a special website, thomascook.caa.co.uk, where affected customers can find details and information on repatriation flights, as well as advice on accommodation for both ATOL and non-ATOL customers.

The first peice of advice issued by authorities is don't travel to the airport to catch your flight home unless you have been notified about a replacement flight.

All information about replacement flights will appear on the dedicated website.

Be prepared for the fact that your replacement flight may not be at the same time as your original or take you to the same destination. The CAA said it will provide buses between airports to ensure that passengers are transported to the airport they left from.

The CAA said holidaymakers should not have to pay their hotel bills – bills that are usually picked up by the tour company after the stay – but that nervous hoteliers may try to pressurise tourists into leaving or foot their own bill.  Any such requests should be refered to the CAA to deal with.

Passengers currently overseas may also make claims for the cost of replacing ATOL protected parts of their trip, or for out-of-pocket expenses as a result of delayed flights home.

ATOL Protected passengers with future bookings are entitled to a full refund for their cancelled holiday.

The British government has said that even flight-only customers will be taken care of, even though flight only bookings are not Atol protected.

“Everyone on a Thomas Cook holiday with a return flight to the UK within the two weeks will be brought home,” said the Department for Transport.

If your return flight is after the two week period then you may have to cover your own costs home.

“The Civil Aviation Authority will be launching a service to manage all refunds by Monday 30th September, once the flying operation has progressed. This refunds service will seek to process all refunds within 60 days of full information being received.”