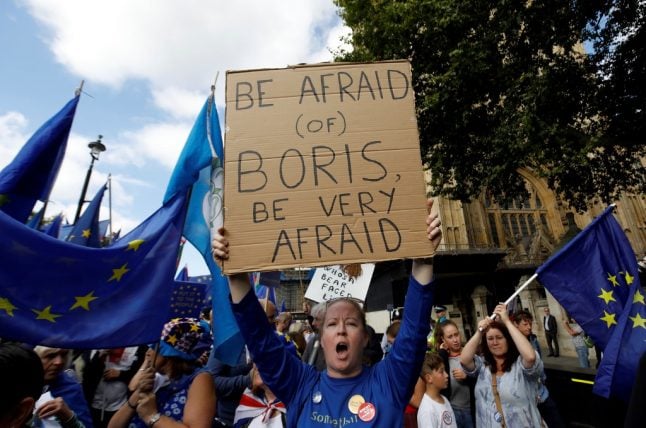 Britain's health secretary Matt Hancock announced on Monday that health costs for UK pensioners living in the EU and those with disabilities would be covered for six months if Britain leaves the bloc on October 31st without a deal.

That would see 180,000 UK citizens living in the EU, continue to have their healthcare paid for by the UK under the S1 scheme for six months after Brexit.

That's six months less than a UK government pledge made in March to cover healthcare costs for on year in the event of a no-deal Brexit.

But while health secretary Hancock claimed the announced showed that “protecting the healthcare rights of UK nationals is a priority of this Government” it prompted much anger among campaigners and an accusation of betrayal.

'A massive betrayal of British people in Europe'

“This is yet more smoke and mirrors from the UK government and another massive let-down for UK pensioners in the EU 27,” said Jeremy Morgan, the vice-chair of British in Europe.

“Having paid UK taxes and contributions all their working lives, when they moved to their host country, they had the right and expectation to NHS-funded medical treatment for life.  This was a key factor in the decision of many when moving.

“Now the only guarantee they have is for six more months, or up to a year if they have already started treatment.  Just think what that means to someone who already needs life-long treatment, or a pensioner who gets a cancer diagnosis a month after Brexit.”

Kalba Meadows from the France Rights campaign group said: “In just a few minutes since this news was published we've seen an outcry of anger among Brits in France – and with good reason.

“It's a massive betrayal of British people in Europe. All the promises that we were a priority and that we would be 'able to live our lives as before' have turned into an illusion”.

British pensioners living throughout Europe have been warned however that they must take action to register for healthcare in their member states or they faced being ineligible for the six months cover. Letters will be sent out to 180,000 citizens urging them to act.

“To be eligible for this support, people must apply within local timeframes or no later than six months after we leave, whichever is the shortest,” read the government statement.

But British in Europe's Morgan said: “The Government is urging them to “act now to secure access to healthcare” as if it were as simple as ordering coffee in a restaurant.

“People won’t get private health insurance if they have existing conditions, and in those countries where it is possible to join a national scheme the cost is simply unaffordable for someone living on the state pension worth 20 percent less in euros as a result of Brexit.”

The British government has said that it has proposed to each EU member state that healthcare costs for those on the S1 scheme be covered until December 2020, but that if countries do not agree on this date by October 31st then the cover will only last six months.

As well as anger the announcement on Monday has provoked much confusion, especially in France, where the government has already passed a law that pledges to cover the healthcare costs of British pensioners for two years. Although the French decree depends on reciprocity with the UK.

“We don't know whether France is likely to reduce its two years health care cover in the light of the UK statement,” said Kalba Meadows from the France Rights campaign group.

“We don't know exactly what S1 holders in France will be required to do – will they have to make an application to join PUMa, and if so when? Or will the switch, if and when there is one, happen automatically?” she added.

“In other words, we don't know very much at all,” she said.

“I've been through a huge roller coaster of emotions over the last three years but this has upset me and made me more angry than anything else because it's targeting the most vulnerable who are already terrified,” she added.