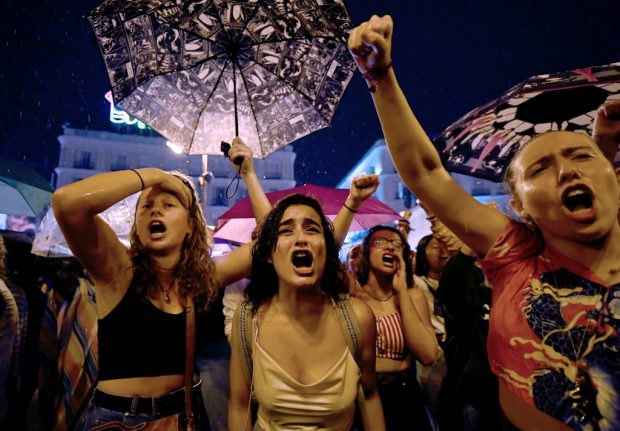 Chanting “They are murdering us” and carrying signs reading “There is no justification” or “Women's lives matter”, several thousand protesters, mainly women, took to the the central Puerta del Sol square despite a thunderstorm for the rally organised by various women's rights groups.

Many of them were decked out in purple, the colour of the feminist movement, or held candles, lanterns, torches and mobile phones to honour the memory of domestic violence victims.

Similar protests were held in cities and towns across the country from San Sebastian in the north to Seville in the southwest, as well as in Spain's Canary Islands in the Atlantic.

The demonstrations were called after a series of high-profile rape cases and a rise in the number of women killed at the hands of their partners or ex-partners.

“This summer has been barbaric, with figures on gender violence that are chilling for a state that has pioneering laws” against gender violence Covadonga Peremarch, the spokeswoman for the protests' organisers, Feminist Emergency, told Cadena Ser radio ahead of the demonstration. So far this year 42 women have been murdered in domestic violence attacks, including 19 over the summer, according to interior ministry figures.

In late 2017, Spain's parliament unanimously passed a series of measures designed to bulk up the original law.

Despite these measures a total of 1,017 women in Spain have lost their lives at the hands of their partners or ex-partners since the country's government began to officially count these deaths in 2003.