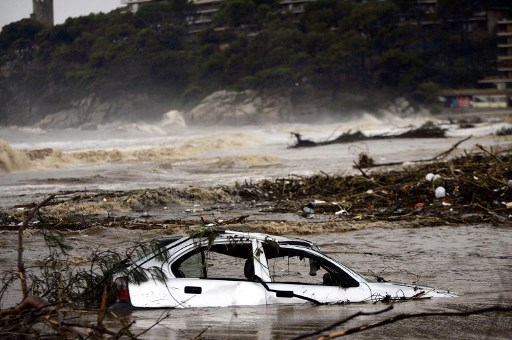 The latest tragedy occurred in the city of Almeria when the tunnel was “flooded by a huge amount of water in a few minutes,” Almeria city hall said in a tweet.

A policeman managed to rescue two of the three people in the vehicle, but “one occupant remained inside the car”, Almeria mayor Ramon Fernandez-Pacheco told news radio Cadena Ser.

Almeria airport was closed on Friday due to flooding caused by the heavy rain “which was making it difficult for passengers and workers to reach it”, a spokeswoman for Spanish airports operator AENA said.

Just under one million passengers passed through the facility last year.

A 61-year-old man and his 51-year-old sister died on Thursday when their vehicle was swept away as fast-moving waters swamped a road in Caudete, a municipality around 100 kilometres (60 miles) southwest of the port city of Valencia, the emergency services said.

Elsewhere the rain caused chaos on the roads, cutting public transport and prompting rivers to burst their banks, flooding homes and forcing the evacuation of surrounding areas, officials said.

Footage shared by the local AVAMET weather service showed cars being swept away in fast-flowing water in Moixent, and torrents of water engulfing the nearby town of Ontinyent, which borders the Clariano river and saw its heaviest rainfall since records began in 1917, the agency said.

Schools across the region suspended classes on Friday for the second day, as the heavy rains are set to continue.