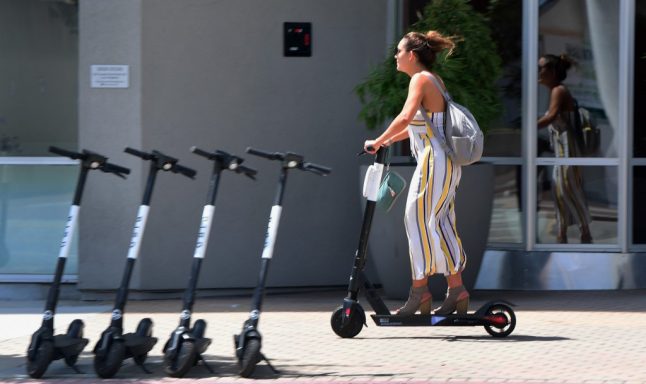 Malaga town hall is preparing a “strict” by-law aimed at clamping down on the reckless and disorderly use of electric scooters in the coastal city.

The new measures will mean e-scooters – rented or privately owned – can only be used on bike lanes and on regular roads meant for vehicles.

The regulations, which are expected to come into force in October, will ban the controversial means of transport from pavements, promenades and the city’s central historical area.

What’s been ruffling feathers in particular among city officials is users’ inability to park the e-scooters in the 29 central (and public) docking stations granted to numerous private companies, dropping them instead wherever they want on the pavement.

There are roughly 1,500 rental e-scooters available in Malaga, operated by Spanish and international firms such Ufo, Wind, Tier, Helbiz, Lime, Movo and Uber.

Authorities are reported as being “disgruntled and very angry” with said companies for practically washing their hands of users’ misuse of the vehicles.

“We can’t understand how it takes them 15 to 20 minutes to remove an e-scooter from the pavement,” Mobility Councillor José Del Río told local daily Málaga Hoy. “Some of them are left there for hours, which means the companies aren’t doing their job properly.

Del Río also hinted that Malaga town hall would get rid of the public docking stations in central Malaga, leaving the firms with no other option but to rent private space.

E-scooters have always been banned from the inner ring of Malaga’s historic district for safety reasons, but this measure has also been widely ignored.

Harsher fines of €200 are expected to curb this trend.

“We have to protect the pedestrians somehow or other,” Del Río added.

“At the moment, if you’re taking a walk you have to always look around you in case an e-scooter rider is coming, this isn’t on pedestrian areas.”

“The companies have to create a system which stops the e-scooters from being ridden in Malaga’s historic area.

E-scooter companies will also be expected to introduce a system which physically prevents the vehicles from entering central Malaga.

The firms will also be forced to set up customer service desks with staff that ensure all e-scooters are correctly parked or if not picked up from the pavement at a faster rate.

“The bylaw is going to be strict and the companies are going to have to get a lot more involved if they want to continue operating in the city,” Del Río concluded.