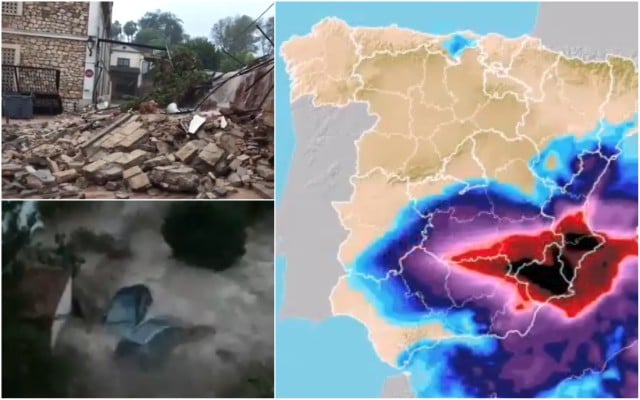 Summer in Spain appears to be well and truly over with the arrival of a cold front that is currently wreaking havoc in many of country’s eastern regions.

The “gota fría”, as this meteorological phenomenon is called in Spanish, has brought with it very heavy rainfall, hail, winds of up to 100km/h and huge waves along mainland Spain’s eastern belt.

The Mediterranean regions of Almería, Alicante, Valencia and Murcia are currently bearing the brunt of the storm – and are all on high alert for extreme weather.

In fact, it’s the first time since 2007 that Spain’s weather agency AEMET has activated a double alert for both rainfall and storms, as this dangerous cold front has the potential to generate two-centimetre wide hailstones, gale-force winds of up to 100km/h and even tornadoes.

Meteorologists are forecasting 60 to 90 litres of rainfall per sqm to come pouring down in just 60 minutes in some areas, and 200 litres/sqm overall on Thursday.

The Valencian municipality of Ontinyent has experienced some the worst weather thus far, with more than 250 litres of rainfall/sqm in just 24 hours, causing the Clariano river that runs through it to break its banks. The Valencian village of Moixent (seen above) has also been badly hit, with cars being dragged downstream by the floods.

The weather along and around Spain’s eastern coastline initially took a turn for the worse on Monday night, but it was on Wednesday that the storms really began to cause serious problems.

Floods are also affecting areas of Spain that are further inland, such as the city Albacete in Castilla y La Mancha.

We will continue to update this page with more photos and footage from people caught in this very rare weather phenomenon.