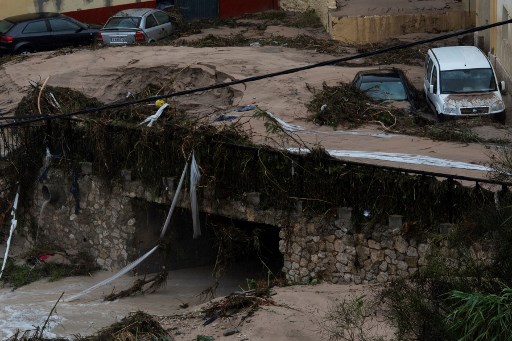 The couple, both in their 70s, died when their vehicle was swept away as fast-moving waters swamped a road in Caudete, a municipality some 100 kilometres (60 miles) southwest of the city of Valencia, the emergency services said.

Elsewhere the rain caused chaos on the roads, cutting public transport and prompting the nearby Clariano river to burst its banks, flooding homes and causing the evacuation of surrounding areas, officials said.

Footage shared by the local AVAMET weather service showed cars being swept away in fast-flowing water in Moixent, and torrents of water engulfing the nearby town of Ontinyent, which borders the Clariano and saw its heaviest rainfall since records began in 1917, the agency said.

With the region on red alert, regional authorities in Valencia said they had ordered the closure of schools in 84 municipalities, affecting more than 255,000 pupils.

Local authorities in the neighbouring region of Murcia also ordered the closure of all schools on Thursday and Friday due to the heavy rain. A university was also closed.