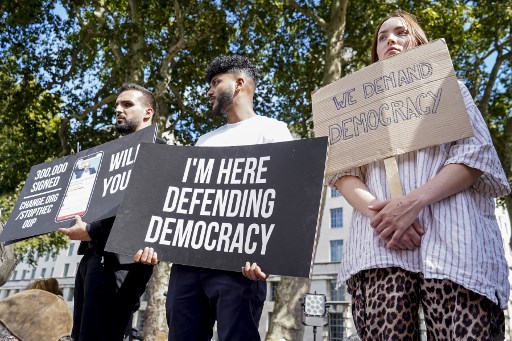 Placards at the march on Westminster on Saturday. Photos: AFP

The British public has grown tired of the journey and it’s understandable that an oft-heard cry is “are we nearly there yet?”

The short answer is: “Not even close.”

Even if we left the EU at the end of October, the Brexit journey would be only just beginning. Anyone who believes that Brexit would be over at that point would be severely disappointed. Negotiations over any future trading relationship with the EU would take several years to complete. Not forgetting the much-hyped deals to be made with the rest of the world. Thus far, the UK isn’t doing so well on that front, either!

Since becoming prime minister, Boris has stated on many occasions that Britain is leaving on October 31st, “do or die”. Theresa May made similar claims about the earlier Brexit dates of March 29th and April 12th. She said it over 100 times, in fact. It appears that constant repetition doesn’t make something come true!

If we required proof that Johnson is prepared to act on his promise to do anything necessary to force through Brexit, we had it in spades last week. The possible suspension of parliament had already been discussed, but Johnson acted on it. He gained permission from the Queen to prorogue parliament for five weeks – an unusually long period – with the unconvincing justification that it’s to deliver his “exciting” new legislative policies. Except for Brexiters, few people were convinced. His unprecedented action was immediately greeted with outrage and condemnation from all opposition parties, some rebel Conservative MPs and the British public.

Many people suspect that Johnson’s true motive is to prevent MPs from thwarting his Brexit plans. The day before Johnson’s announcement, opposition parties held cross-party talks to determine the best way forward. Having considered the nuclear option of calling a vote of no-confidence, they determined that the best option was a legal challenge, with a vote of no-confidence as a back-up plan. The idea was to bring forward legislation forcing the government to seek an extension, to avoid leaving the EU without a deal. Following Johnson’s latest actions, the vote of no confidence is likely to reappear on the table.

The public reacted immediately to Johnson’s prorogation plan. Within hours, crowds of people had gathered throughout Britain to protest, with the largest crowd gathering in Westminster. A petition calling for parliament “not to be prorogued or dissolved unless and until the Article 50 period has been sufficiently extended or the UK’s intention to withdraw from the EU has been cancelled” collected over one million signatures in the first 24 hours alone. On Saturday, tens of thousands of protestors gathered in 34 different cities across the UK, to demand that parliament #StopTheCoup. Photo from the march: AFP

The public also responded to requests on social media to lobby MPs. Bremain in Spain members were very active on this front. Many MPs immediately replied, stating that they’d never, in their parliamentary roles, received so much correspondence in a single day. The response was almost universal condemnation of Johnson’s prorogation plan, a commitment to support any action to prevent it, and to prevent a no-deal. Johnson’s plan to silence parliament seems to have been effective at galvanising support against him and ensuring a speedier rebellion than was previously anticipated.

Another tactic against Johnson – a legal action from 70 MPs and peers – was due to be heard in the Edinburgh court on September 6th. Led by SNP MP Joanna Cherry and QC Jolyon Maugham, the challenge aimed to prevent the prime minister from proroguing parliament. Maugham described Johnson’s plan as “the act of a dictator” and added “we cannot allow it”. When it became apparent that Boris had already acted, a hearing in the Outer House of the Court of Session was expedited. The Court of Session has now agreed to advance the full hearing to Tuesday 3 September and may ask Johnson to submit a signed affidavit or even appear in court.

The prime minister insists that he has the support of the country and a clear mandate to deliver his Brexit plan. This is a blatant lie. No-deal was barely discussed pre-referendum, so any claims that the public voted for this model of Brexit are false. Furthermore, the catastrophic nature of a no-deal Brexit was unknown in 2016, so any support for this model would have been an ill-informed choice. Even now, Brexiters discredit the warnings of economic disaster as being false, despite these warnings coming from the government’s own detailed analyses.

Regardless of how you voted in the referendum, or in the last election, don’t let the government tell you what you voted for. It’s likely that, soon, those of us who still have our voting rights will have another say. Make sure you’re ready to take back control and restore sovereignty to parliament, not to the prime minister. After all, wasn’t parliamentary sovereignty and democracy what Brexit was supposed to be about?