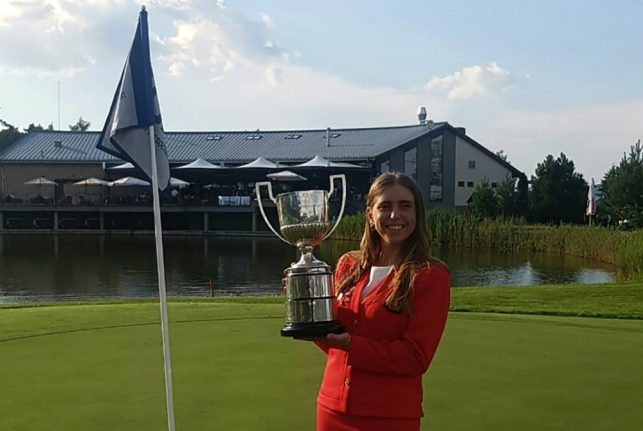 Barquin Arozamena, 22, was stabbed to death after being ambushed by Collin Richards while she played at Coldwater Golf Links in the city of Ames on September 17th last year.

The Iowa State University student's body was found by staff at the course shortly after the attack, which occurred in broad daylight.

Richards, who had been living in a homeless encampment near the course where Barquin Arozamena was attacked, had been released from prison three months before the incident.

The 22-year-old had pleaded guilty to first degree murder in June this year.

On Friday, a judge in Story County, Iowa formally confirmed his sentence of life without the possibility of parole.

“Celia was a woman who radiated a desire to live, to improve day by day so as to reach her dreams but without missing the opportunity to offer help to whoever asked for it,” Reynolds read.

“It has been, and continues to be, very hard to fight with the impotence of such a cruel, random and absurd crime.”

“Her murderer will spend the rest of his life in prison without the possibility of parole,” Reynolds said.

“Although the criminal matter is concluded today, our community is just beginning the healing process.”

Barquin Arozamena hailed from Puente San Miguel in Spain, and in 2018 was named Iowa State University's female athlete of the year, having claimed a major conference championship victory.

She had finished her university golf career, which ran from 2015 to 2018, and was completing her studies for a civil engineering degree when she was murdered.

Barquin Arozamena was the school's career leader in stroke average (73.44) and was the third woman golfer from Iowa State to compete in the US Women's Open Championship.