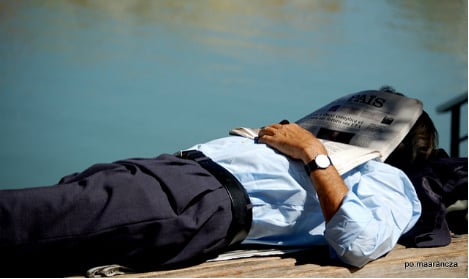 Spaniards leave home much later than everyone else An enduring stereotype when it comes to Spaniards is that they live at home far longer than their European counterparts, enjoying all the home comforts madre can offer until often well into their 30s. This is most definitely true: a whopping 80 percent of Spaniards under 30 still live at home, but some Spaniards are more likely to live at home than others; while young Spanish women often fly the nest, young men are less inclined to leave home.

Spaniards are all lazy A worker takes a snooze in Seville. Photo: Karolina Lubryczynska

While the image of Spaniards as work-shy shirkers with a “mañana” attitude is one they just can’t seem to shed, they actually work some of the longest hours in Europe – longer than those stereotypical work horses, the Germans! Spaniards love nothing more than going to their local bullring and watching a bullfight, or so the old stereotypes would have you believe. Actually, these days Spain is more or less split in two – those who defend bullfighting as a cultural tradition and those who want it banned for its animal cruelty – and the latter are gaining support like never before.

The regions of Catalonia and the Canary Islands have already banned the practice, while several other regions have debated doing the same. It is more and more common these days for bullfighting events to draw protests.

Although over 3,000 Spanish festivals involve cruelty to animals according to a report by a Spanish animal welfare group, bullfight attendances are at a record low.

According to figures from Spain’s Ministry of Culture, just 8.5 percent of Spaniards go to a bullfight annually.

Spain is all about sun, sea and sangria The image of Spain for most foreigners is the beach, the pool and a jug of sangria but there is much more to this country than the old holiday stereotypes.

Spaniards from the northwestern region of Galicia scoff at the sunny Spain label – Galicia is the rainy region of Spain, it is exposed to the elements which makes for a region of lush green hills and, more often than not, very drizzly days. At the beginning of 2016 some towns in the region suffered their worst flooding ever and hundreds were forced to evacuate their homes.

There is also much more to Spain than the sea, like the beautiful mountains of the Pyrenees and Picos de Europa, the country’s national parks and its amazing skiing resorts.

And here’s a little secret: Spaniards generally drink tinto de verano and leave the sangria to the tourists…

Spaniards do everything late Spaniards do seem to run on a completely different timetable to practically every other country on earth, eating lunch between 2pm and 4pm and not tucking into dinner until well after 9pm. This is completely true, but there is a good reason for Spain’s tardiness: it is technically in the wrong time zone.

Up until 1942 Spain was on Greenwich Mean Time (GMT), the same as London and Lisbon but it was during the Second World War that Spanish dictator Francisco Franco decided to put Spain’s clocks forward an hour in line with his friends, Nazi Germany.

There have been several campaigns for Spain to change its clocks back, with supporters arguing that it would increase productivity and do away with the late mealtimes and even the siesta. The idea is even gaining political support and it looks like Spain might actually turn the country’s clocks back, once and for all. You don’t have to spend too long in Spain to realize that Spaniards are loud and like the noises around them just as loud. Walk past bars and your ears will wince at the bellowing voices competing with the blaring television, with a few barking dogs thrown in for good measure. It is in bars and restaurants where Spaniards are the noisiest, so much so that one Spanish charity has actually launched a campaign to shut people up.

The Dine Quietly campaign aims to encourage Spaniards to reduce their noise levels to create a more pleasant atmosphere for diners and improve conditions for the hard of hearing. “Spain is the noisiest country in the world after Japan,” the head of the charity Oír es Clave confirmed to The Local.

Spain is a tourist’s paradise Ah Spain, the capital of the package holiday and home of such illustrious holiday hotspots as Benidorm, Magaluf and Marbella. A tourist’s paradise, you might think, and tourism certainly is one of the country’s most booming industries.

But the millions of tourists flocking to Spain’s shores each year have begun to irritate the locals. Barcelona has introduced measures to limit tourism and cutdown on Air Bnb rentals while British bobbies even had to patrol in Ibiza and Magaluf in an attempt to control rowdy British tourists.

And locals in Mallorca recently daubed the island’s capital, Palma, in graffiti declaring refugees were more welcome on the Balearic island than the dreaded tourists.

Spain stops for a siesta A man takes a break on a Madrid bench. Photo: Jessica Jones

The Spanish custom of taking a siesta is world famous. The fact that lunch hours in Spain typically last between two and three hours and that shops and businesses often close between  two and five help fuel the perception that much of Spain heads off for an afternoon kip.

While in rural areas, specifically among agriculture workers who rise early and for whom it is impossible to work in the scorching heat of day, that may be true, it is rare for most Spaniards to take a daily nap.

A recent survey showed that the majority (58 percent) of Spaniards actually never take a nap and only 16 percent admit to taking one every day.

The sad truth is that however wanted a siesta might be, most people don’t have time to pop home to rest their heads even in a lunch hour lasting three hours.

But there are exceptions to every rule and Spaniards who happen to live in the Valencian town of Ador are very lucky indeed as the mayor there has brought in bylaws to protect the sacred siesta. Princess Cristina and her husband are currently on trial. Photo: AFP

Hardly a week goes by in Spain without a new corruption case breaking. Politicians across the political spectrum, from former conservative party treasures to local councillors are currently embroiled in graft scandals. Not to mention former bankers, real estate bigwigs and even members of the Spanish royal family.

READ: 10 corruption scandals that will take your breath away

In fact, a 2019 study showed that an average of seven people are arrested each day in Spain as part of corruption investigations and it the country now ranks as one of the most corrupt in Europe, coming in at 36th place in a ranking by anti-corruption campaign group Transparency International,

Spain is religious and conservative Spain is a Catholic country full of pious women wearing mantillas… isn’t it? Well it certainly looks that way during Holy Week. Spain gets really into Easter, with parades, masses and huge fiestas in most towns and cities across the country.

But religion and state are very much separate here and Spain is, perhaps surprisingly, incredibly liberal in many areas.

It was one of the first countries in the world to legalize gay marriage in 2005 and was ranked as the most gay friendly country in the entire world in a Pew Research Centre study in 2013.

And while the country may have the reputation of being devoutly Roman Catholic, one in five Spaniards are actually convinced atheists. In fact, Spain came in fifth in a world study of the countries with the most adamant non-believers, with only China, Hong Kong, Japan and the Czech Republic being less religious.

Thankfully this is one stereotype that is unequivocally true as any visitor to Spain will confirm. Every single town has at least one fiesta a year when the streets are filled with music, dancing, eating and drinking.

Whether it is chucking tomatoes at each other, dousing revellers in wine or being chased through the streets by a pack of bulls, there is no doubt that Spaniards know how to let their hair down. Just as all Scots do not wear kilts, all Spanish women do not wear flamenco dresses. In fact, the only time you are likely to see these dresses en masse is during a feria – a fair when Spaniards get dressed up and eat, drink and dance.

READ MORE: All the fun of the fair: A guiri’s guide to Spain’s ferias

Flamenco as a dance originated in the gypsy communities in the south of Spain – especially Andalusia – and many of these carry on the tradition to this day, but finding an authentic flamenco show in Spain can sometimes be a challenge…

More often than not, audiences are made up entirely of tourists, Spaniards save their flamenco appreciation for during the feria.

Far from the traditional flamenco shows, the dance has been used in more recent years as a form of protest in Spain, the angry foot stamping a perfect outlet for the outrage many Spaniards have felt about the economic crisis.