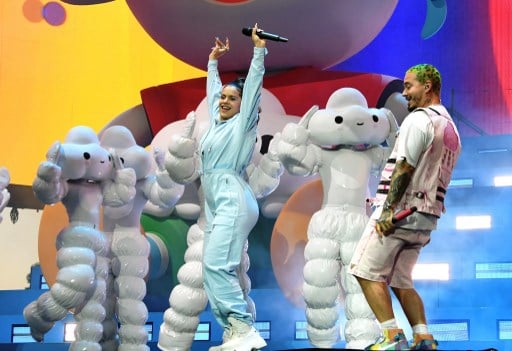 Whether you're hitting the bars in Spain or partying at home, these are 10 hits that may just get you up on your feet and boogieing the summer nights away.

ROSALÍA has been riding the wave and living her dream since the explosion of her second album ‘El Mal Querer’, which went platinum in January this year. The 25 year old, who won two Latin Grammys in 2018, shows her musical versatility witg her own ingenious take on flamenco, which features in the album, with 'Con Altura'. ROSALÍA says that the collaboration on the track came naturally as she and El Guincho have always had a great time making music together, and when she sent the song to J Balvin via Wattsapp, he was quick to respond with his own verse.

'Callaita' by Bad Bunny and Tainy

The Puetro Rican trap and reaggaton singer, Bad Bunny, whose voice you may recognise from his collaboration with Cardi B in the hit ‘I Like It’, found his fame on Soundcloud in 2017 while working at a supermarket. ‘Callaita’, which features Tainy, currently sits at the top of Spain’s Spotify charts and rising up for the third week on the Latin Billboard charts.

'Otro Trago' by Sech and Darrel

Topping the Spotify charts in several South American countries and sitting at number 8 on Spotify’s global charts, ‘Otro Trago’ is proving a bit of a breakthrough single for the Panamanian artist Sech. The song has a more chilled feel that others on the list; it's less of a party hit and more of a relax-with-your-friends-and-enjoy-the-sun vibe.

Entering its ninth week at number one on the Billboard charts, ‘Con Calma’ is definitely a hot one this summer. Daddy Yankee, who is known as the King of Reaggeton, has also released a remix of the song featuring Katy Perry. You will know Daddy Yankee from ‘Despacito’, which the artist released with Luis Fonsi back in 2017 and may have been stuck in your head more than once over the past couple of years. The song achieved worldwide success for Daddy Yankee, making him the first ever Latin artist to earn the title of most listened artist worldwide on Spotify.

Another hit from Bad Bunny, 'MIA' features the American artist Drake, who shows off his Spanish language skills in the song. ‘MIA’ is in its 37th on Billboard’s Latin charts and is still thriving at number two, so its likely to stick around for the heat of the summer.

On its 38th week on the Billboard Latin charts, you’re likely to recognise this collaboration which somehow gives you the urge to start moving your hips. DJ Snake is actually French, but features come from the Puerto Rican singer Ozuna and the American artists Cardi B and Selena Gomez, performing in a mixture of Spanish and English.

‘Baila Baila Baila’ was released at the beginning of the year, and soon became a Latin party anthem, reminding us to keep dancing through the summer. Ozuna, surprised fans this year by performing a remix of his song, featuring Daddy Yankee Anuel AA, J Balvin and Farruko during the 2019 Billbaord Latin Music award in April. The collaboration is still part of the Billboard top 10 Latin songs.

Luis Fonsi, whose previous success comes from well-known hits such as ‘Despacito’ and ‘Échame La Culpa’, contributes to the Latin music scene with ‘Date La Vuelta’ this summer. A catchy chorus and a rhythm you can jam to make it no surprise that the music video for this song gained more than 1 million views on YouTube in less than 24 hours when it was first released in April.

With an opening riff that echos Ed Sheeran’s ‘Shape of You’, this jammy tune may just be the thing to get you out onto the dance floor this summer. The remix version of the song, which features Daddy Yankee and Bad Bunny is currently at 13 on Spotify’s global charts.

The artist Dayvi has emerged with ‘Baila Conmigo’ which is currently at number 7 on Spotify’s Global Viral top 50. It may just be a song to sizzle on the dance floors this summer, with a trumpet riff and a beat to get you up off your feet and dancing the night away.

HEALTH
LISTED: The 14 sun creams Spain wants to take off the market