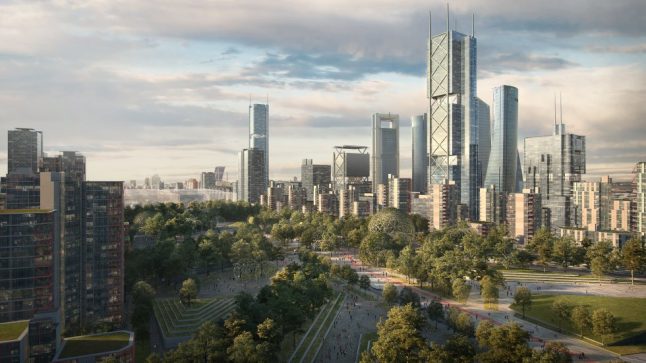 Dubbed, Madrid Nuevo Norte, the massive real estate project was formerly known as Operation Chamartín,and was always planned as the next stage of development of the area around Chamartín train station after construction of the four towers. The project covers some 3.3 million square meters of land and promises to create three new towers, among them one which reach the lofty height of 300metres and become Spain’s tallest building.

The development will consist 348 individual buildings of which 60 percent will provide office space and business premises and remaining 35.46 percent, new housing comprising 10.476 units, of which 20 percent is designated as “affordable housing”. The project has been modified to ensure 80 percent of transport needs can be met by public transport with three new metro stations planned – Centro de Negocios , Fuencarral Sur and Fuencarral Norte – a new bus route and 15km of cycle lanes.

“We have put sustainability and sustainable mobility at the forefront,” explained Javier Herreros, one of the architects behind the project which also involves Ana Riaza, as well as Richard Rogers.

It will link two new housing developments with a “green corridor” and will see the redevelopment of Chamartin station, sinking the railyards beneath ground and covering it with a huge park to link the Plaza de Castilla with Avenida Burgos. How much will it cost?

The budget for development is currently set at €7.3 billion but the plans estimate the project will boost the region’s economy by €18.3 billion, creating more than 240,000 new jobs. Hasn't this been talked about for years?

The project, first mooted in 1993, has been mired in political strife with subsequent city administrations battling to get it passed.

It was all set for approval on two occassions but was scuppered both times by events beyond the control of any council.

The first because of the terrorist attack on four commuters trains in March 2004 and the second in 2008 when the global financial crisis sparked Spain’s construction bubble to burst and threatened the economic viability of such a grand project.

Finally, after going through various reincarnations under different mayors and with a thorough reworking by the last City Hall administration under Manuela Carmena, the project was tabled once again and won approval in a unanimous vote on Monday uniting councillors from Mas Madrid, PP, Ciudadanos, PSOE and Vox.

It now has to pass approval by Madrid’s regional government as the project involves rezoning legislation.

How long will it take?

Construction work is scheduled to start in late 2020, and the entire project is estimated to take 24 years to complete. It will be built in three destinct phases beginning with the station redevelopement and followed by  Centro de Negocios (Business Center), Las Tablas Oeste, slated for completion in 2033, and Malmea-San Roque-Tres Olivos, due to be finished in 2037.

The group behind the project is the developer Distrito Castellana Norte (DCN), which is controlled by the BBVA bank, which has a 75.5percent stake in the project and construction conglomerate Grupo San José, with 24.5 percent stake.

So, by 2044, barring any delays, the north of Madrid will have completely transformed and boast an entirely new skyline. READ MORE: Words and phrases you need to know to be a true Madrileño