Chorreras del Cabriel in Cuenca province (central-eastern Spain) isn't in the list below but is just as impressive as some of the other natural swimming pools in the country. Photo: Antonio López/Pixabay
Spain has a vast array of beautiful piscinas naturales and charcas spread over its territory and islands, some tucked away in mountain ranges, others just a stone’s throw away from the jam-packed playas.

A collection of fifteen lakes set within a natural park in the plains of La Mancha. Natural waterfalls, crisp, clear turquoise waters in an area rich in flora and fauna. 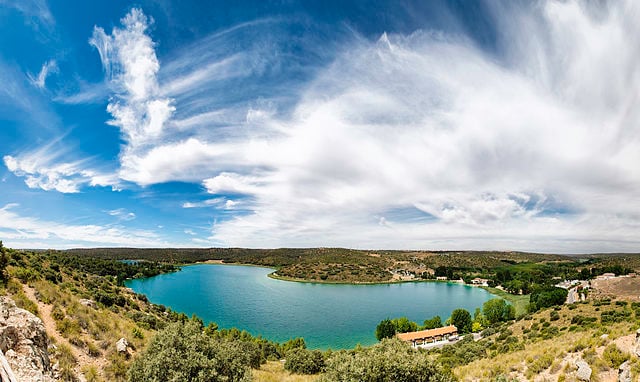 Created naturally by flowing lava, these fresh water turquoise pools offer protection from the crashing waves of the open sea just beyond the rocks. Charco Azul is one of dozens if not hundreds of natural pools dotted along the volcanic coastline of the eight Canary Islands. 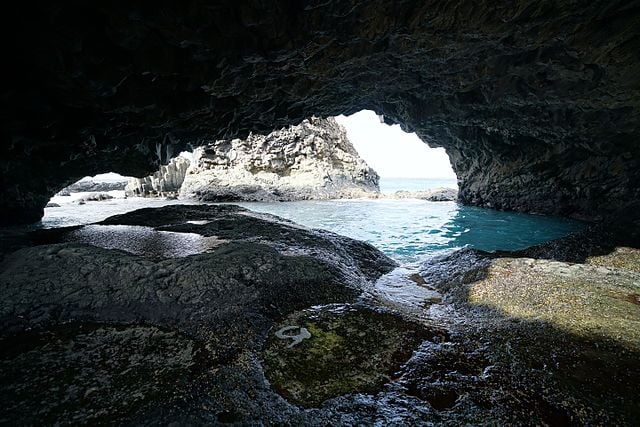 Want to know what it feels like to swim inside a cave? Photo: Sreuland/Wikipedia (CC BY-SA 4.0)

Just one hour’s drive from Madrid near the town of Manzanares El Real, this is where madrileños in the know go to escape the heat and cool off with a dip in the cool fresh waters of Madrid’s river.  A series of natural rock pools just perfect for jumping into. Photo: Nicolas Vigier/Flickr
Embalse del Guadalhorce, Málaga
Less than an hour’s drive north-west of Malaga and a world away from the bustling Costa del Sol is this reservoir. With it’s soft sandy banks this is a great place for swimming, kayaking and enjoying nature. 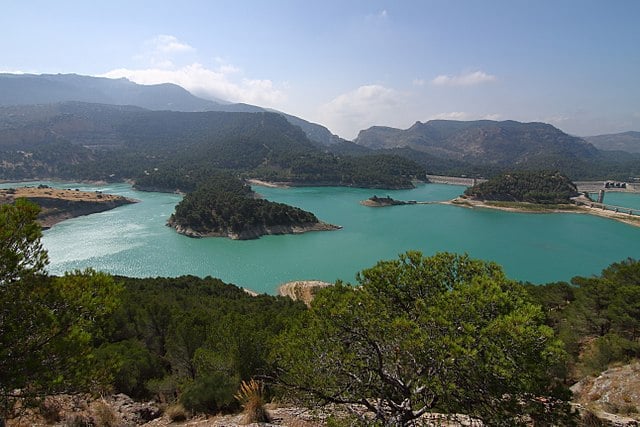 You don’t have to go to the coast to find turquoise waters in Spain. Photo: Malopez21/Wikipedia (CC BY-SA 4.0)

These rock pools are at the far western end of the Sierra de Gredos mountain range in Spain’s Cáceres province. Just the right spot to cool down after a hike. 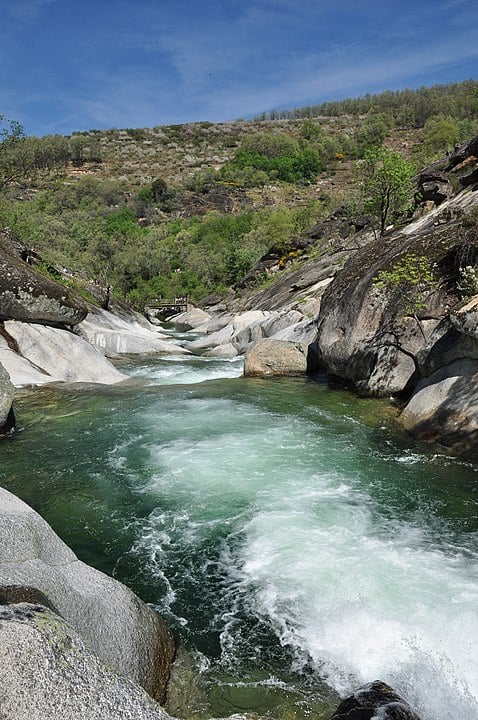 Garganta de los Infiernos is the perfect place to cool down in during summer in Extremadura. Photo: Jesusccastillo/Wikipedia (CC BY-SA 4.0)

A 24 km stretch of cycling track south of Tarragona in Catalonia, this forms part of Spain’s network of Vias Verdes (green ways), disused railway lines which have been revamped as natural trails.

On the Vía Verde de la Terra Alta you can take a break from cycling for a refreshing dip in the Canaleta River, which runs alongside the route. When you get fed up of fighting for a space on the beach in Benidorm, head inland for the tranquility of these natural springs. Undoubtedly one of the jewels of the Alicante province. 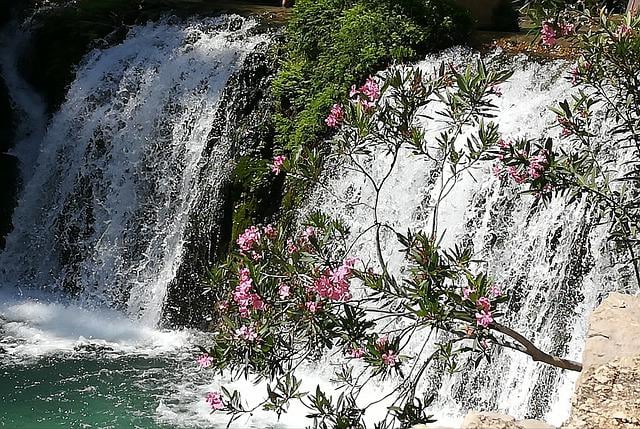 Do go chasing waterfalls at this beautiful spot in Alicante province. Photo: MarthaReLi/Pixabay

These free thermal baths are in the city of Ourense. A series of natural hot pools on the banks of the River Miño. 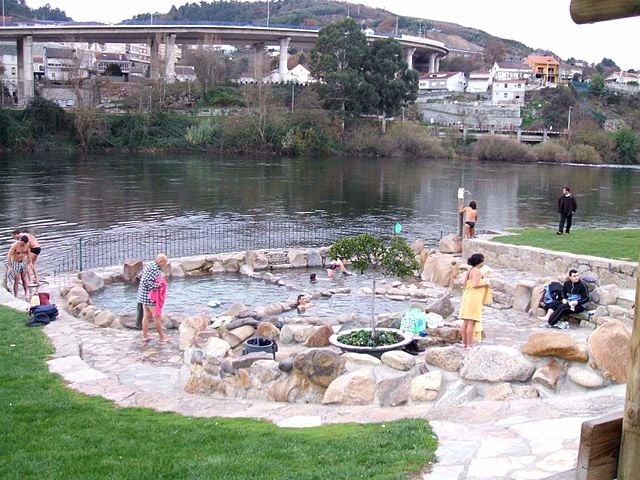 Ourense may not be on the Galician coastline but you can still enjoy a relaxing warm dip in the city. Photo: Zarateman/Wikipedia (public domain)

A reservoir beneath the beautiful Andalusian town of Zahara de la Sierra. Swimming in its cool waters while staring up at the white washed houses clinging to the hilltop crowned by a Moorish castle would be unforgettable. 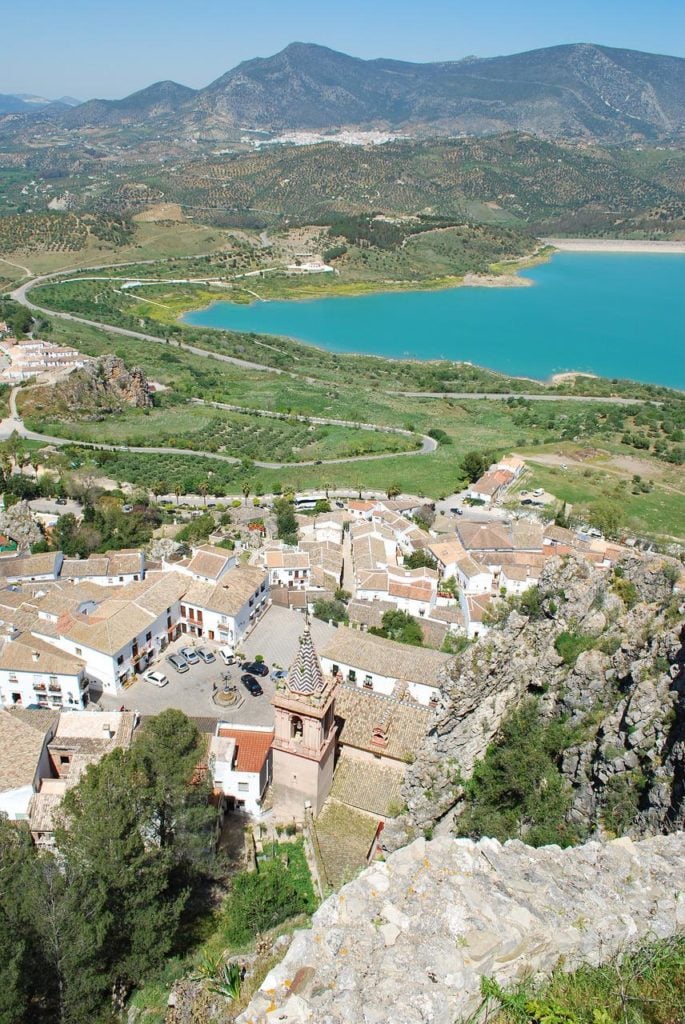 The Madrid region was awarded a blue flag for its stunning Virgen de la Nueva beach on the San Juan reservoir. 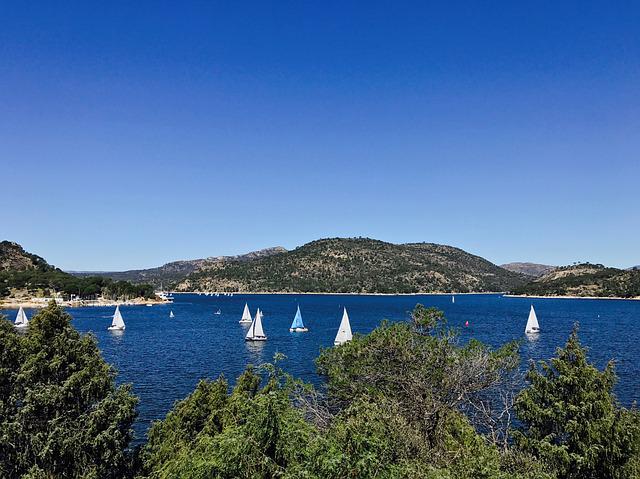 Whether it’s sailing or swimming, the Pantano de San Juan is a fantastic summer getaway for people in the Spanish capital. Photo: Lematraductores/Pixabay