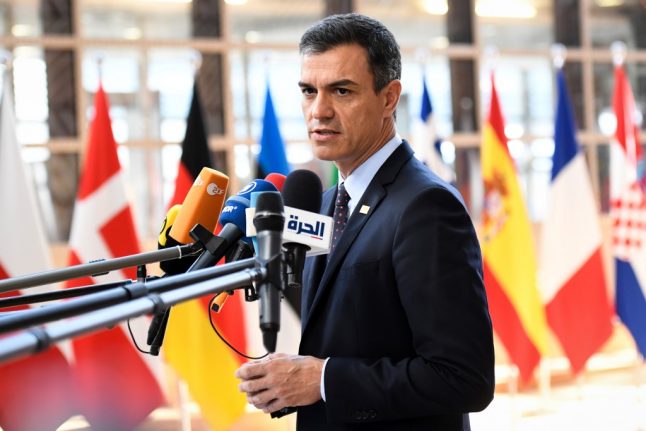 Parliament will vote next week on whether to confirm Sánchez as premier, a role he has held on a caretaker basis since an inconclusive early general election in April.

If he fails to win parliamentary support for another term, Spain could return to the polls in November in what would be its fourth general election in four years.

Sánchez's Socialists won 123 seats in the April election, the most by any party but short of an absolute majority in the 350-seat assembly. Spain's increasingly fragmented political landscape makes it harder for a single party to win a majority.

To succeed Sánchez needs the support of Podemos' 42 members of parliament as well as those of several other smaller regional parties.

But the talks between the Socialists and Podemos have stalled, mainly to disagreements over the composition of the new government's cabinet. “A government which includes Iglesias would not work, it would be paralysed,” he said in a TV interview.

But in a video published Friday on his Twitter account, Iglesias agreed not to have a cabinet position in a coalition government as long as Podemos' overall presence in the cabinet “is proportional to the vote we won” and the party can nominate its ministers.

“I won't be the excuse for the Socialists not to form a coalition government,” Iglesias added.

“We can reach an accord, without vetos, without things being imposed,” a Socialist Party spokesman told AFP, adding that Sánchez “will listen to (Podemos) propositions and choose the team.”

He also said that laying down a manifesto was the first priority rather than who would take which cabinet posts.

Barring a last-minute surprise, Sanchez is likely to fail the first confidence vote on Tuesday when an absolute majority of votes in favour is needed.

His chances will be better in a second confidence vote on Thursday when he will require only a simple majority — more “yes” than “no” votes.

To succeed he would need the support of Podemos as well as the abstention of some Catalan separatist lawmakers, which is not guaranteed.

Faced with this risk, Sanchez has urged right-wing parties to abstain from voting, which would facilitate his investiture during the second confidence vote. They have so far refused.

If Sanchez loses the second confidence vote, a two-month period would begin during which parties would have to resolve the stalemate before new elections would be automatically triggered in the eurozone's fourth-largest economy.

Sanchez would prefer a minority government supported by Podemos but the far-left party has since the beginning demanded that it be given cabinet posts.

A Socialist party source told AFP that Sanchez would “listen” to Iglesias' proposal, adding it was “possible to reach an agreement”.

The two parties have a rocky history.

Sánchez came to power in June 2018 after wining a surprise no-confidence vote against his conservative predecessor with the support of Podemos, Catalan separatist parties and Basque nationalists.

But back in 2016 Sánchez tried in vain to negotiate an agreement with Podemos to become premier. Podemos then voted against Sánchez in a confidence vote, triggering a general election.

Analysts say they did not think another early election is on the horizon.

“We can't rule it out but I think it is in no one's interest. One way or another, they will reach an agreement,” University of Zaragoza political scientist Cristina Monge told AFP.

Oriol Bartomeus, a political scientist at the Autonomous University of Barcelona said the threat of fresh polls was “more of a scarecrow, a game of dupes rather than a real will.”

But “we could end up with new elections unintentionally, which would be a serious problem for (voter) confidence in the political class,” he added.