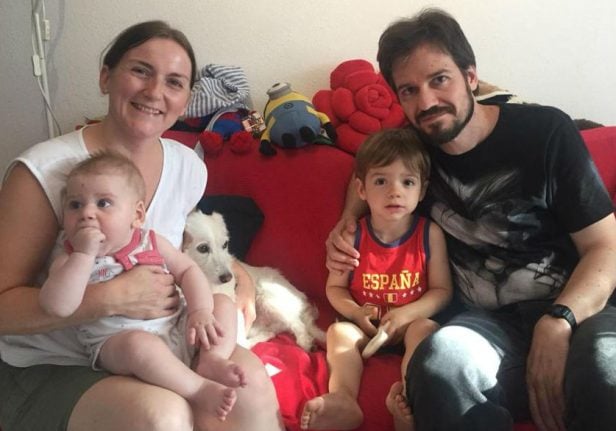 Mary Reid with her partner Raul and their two young sons.

Friday, July 19th was supposed to be a significant day for Mary Reid, 41, an English teacher born in Nottingham, because it was the long awaited day when she was to officially become a Spaniard in a swearing in ceremony at the Civil Registry in Madrid.

But this is Spain and things don’t always go to plan when it comes to bureaucracy. Nevertheless, The Local caught up with the mother-of-two to discuss her quest to become the latest Brit to be granted Spanish citizenship.

“It’s ridiculous to admit this, but I was actually really nervous last night thinking about the monumental step I was about to take. Swearing allegiance to another flag seems strange for me. I’ve always felt proud to be British. I proudly wore the Team GB shirt during the London Olympics, I even have a Union Jack apron,” she laughed.

“I know I will always be British and the renouncing is only symbolic, but it still seems almost like a betrayal,” she said referring to the fact that Spain does not legally allow dual citizenship with UK nationals. so Brits are expected to renounce their nationality (although this doesn't actually require the handing over of a British passport).

“But, well with Brexit, becoming Spanish is the only thing that makes sense.” For Reid, like countless of other Brits resident in Spain, taking Spanish citizenship is the obvious option to secure her future rights not only in Spain but in Europe.

“I’ve been here for 14 years, I’m fluent in Spanish, my work is here but still with Brexit, it all feels precarious,” admits Reid, who has been with her Spanish partner for eight years and has two young sons.

“My family is here, my partner, my children, Spain is absolutely where I feel at home and while I am very happy to go back twice a year to visit my friends and family there, I have no plans to return to the UK to live.”

“Until Brexit, I could quite happily have reconciled the two but now I have to do what I can to secure my future.”

Reid, who originally came over to Spain with the British Council scheme to teach English in Madrid’s bilingual schools, has since become a fully fledged member of the Spanish teaching staff, taking and passing her oposiciones (public servant exams) to become a funcionario (civil servant).

“I was able to do that and now enjoy a job for life because of my status as a Brit within the European Union but once that changes who knows what the future could bring”.

Shortly after the June 2016 referendum in which 51.9 percent voted to leave the European Union, Reid consulted an immigration lawyer.

She started the process when she took her Dele exam to prove Spanish proficiency in November 2016.

She also took the citizenship test (CCSE) and then filed her formal application with Spain’s Ministry of Justice in July 2017 after meeting the condition of having lived in Spain for at least ten years as well as supplying criminal record check.

A month ago she was sent an email informing her that her request for citizenship had been granted and told that in order to complete the process to get her passport and DNI, she had to be sworn in within 180 days.

The whole process has cost Reid upwards of €1,000 but legal fees can push the cost up even more.

“I probably could have gone through the process off my own back but I realised that using someone who knows how to navigate the system and knows exactly how best to approach it, how to get appointments etc would be invaluable and it has been. I’ve been told I’m one of the lucky ones to get citizenship within just two years of applying.”

There was a reported backlog of citizenship applications amounting to around 400,000 by the end of last year, with applications expected to take around three years to process.

Margaret Hauschild Rey, a lawyer who specialises in immigration issues at Bennet & Rey law firm in Madrid, said the number of Brits applying for citizenship had soared.

“Put it this way, I had none before the Brexit vote and now I am working on 30 cases, including Mary’s” she said.

“It is absolutely possible for applicants to do it without a lawyer but as this is what we do every day, we understand the system and how to navigate it so our assistance can help things go smoother.”

But even she admitted that sometimes, it just depends on the person behind the desk that day as to the result as well as the process being in constant flux.

“When Mary applied for an appointment to do the swearing in, it was a requirement for everyone in Madrid to do it at the central Registry Office but by the time the appointment came around, the conditions have changed and they now require that applicants are sworn in at the registry office where they are registered on the padron,” said Hauschild Rey.

But that could change again next week or even if there was someone else on the desk.

Reid, however, isn’t too worried.

“I’ve lived long enough in Spain to expect this sort of bureaucratic hitch,” she said after securing a new appointment in her local town hall of Alcobendas for September.

“I guess that’s just part of being Spanish,” she quipped adding that she was really looking forward to being able to vote here.

Her partner, Raul joked: “Now to be properly Spanish you just have to learn to speak at the top of your voice when in a restaurant!”.