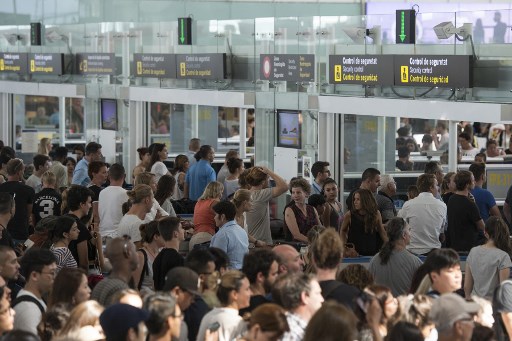 Almost 30 million tourists are expected to arrive in Spain over the summer months of July and August, plus 90 percent of Spaniards choose to take holidays then, with only a quarter opting to go abroad.

As if there isn’t a big strain on transports hubs, travellers will also have to cope with a series of summer strikes that will see delays, cancellations and in some scenarios, travel chaos. First up is a 24 hour strike called by Renfe workers on Monday July 15th.  That means some 320 trains have been cancelled, representing about a third of the scheduled services.

The Ministry of Transport has guaranteed 72 percent service on long distance and AVE trains and 65 percent on the medium distance.

Passengers travelling to Atocha can expect to see a picket line with workers from the CCOO union demonstrating why they have taken the strike action: to protest that Renfe has refused to give satisfactory concessions on pay, hours and conditions.

Another four strike days by Renfe workers were announced by the CGT union later on Monday, which will affect travellers on four of the busiest days of the summer.

Stoppages are planned between 12 noon and 4pm and between 8pm and midnight on July 31st, August 14th, August 30th and September 1st,

Passengers affected by cancellations will be offered alternative trains or are entitled to a full refund.

Anyone flying through Bilbao airport over the summer could have run into problems as AENA staff in Bilbao voted to hold six hour stoppages on alternate days to protest understaffing in customer service, admin and firefighting sectors.

But the unions called off the strike at the last minute after AENA called them back to the negotiating table and on Monday morning, all flights were operating according to the schedule. Iberia ground crew have planned a two strike over the weekend of July 27th and 28th – one of the busiest weekends of the summer when many families head off on holidays – promising to bring chaos to Barcelona airport for another year.

Staff complain that they are overworked and that an agreement struck last year to end similar strike action has not been met.

It won’t just be those travelling on Iberia who could be affected as around 65 percent of ground operations carried out at the airport are done through Iberia staff, so expect a knock-on effect to other airlines.

Security staff at El Prat are also threatening to strike during August, repeating industrial action that saw lengthy queues at the airport last summer – although no details of action have yet been announced.

Staff who work on refuelling planes have begun strike action at Madrid’s airport on Monday 15, which could affect flights with Iberia, British Airways, Vueling and Ryanair.

The Local will bring you more details on upcoming strikes as details are announced.