On the 50th anniversary of man's historic moon landing, Pedro Duque, a former astranaut who became Spain's Science minister, remembers how every child wanted to be an astronaut in 1969.

Pedro Duque is one of the few people to have fulfilled his childhood dream of travelling to space. Now he is Spain’s minister of science, innovation and universities, as well as a former researcher in aeronautical engineering at the Polytechnic University of Madrid (UPM).

We spoke to him on a visit to UPM, which will launch its second satellite into space in September. The former astronaut recalled how he felt on July 20, 1969, when the first NASA moon landing took place, and sets his sights on the future exploration of Mars and the rest of the solar system.

How did you feel when you saw the moon landing for the first time?

I was six years old and like every child in the world, I was glued to the TV. I don’t know if I watched it live or if it was a recording, but it had a significant impact on all of us because it was the first time that a place outside Earth was explored. I think every child wanted to be an astronaut that day. 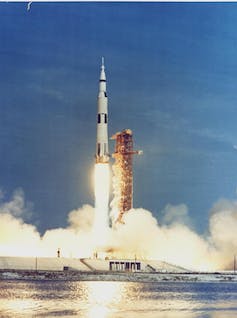 Is it so hard to believe that, 50 years later, some people still don’t believe it happened?

There are ideas that spread through social media, normally due to some economic interest, which say that hundreds of thousands of people are co-conspirators. Others give paid lectures to say that these trips did not truly happen – or that the Earth is flat or hollow. These interests are found everywhere online, since anyone can post nowadays and each one of us has to create our own filter. This is a problem because people are not ready for it, they still have a lot to learn. And that’s not the worst: others earn a lot of money by telling sick people not to see a doctor, that they can cure them with other things. That is much worse.

Is it necessary to return to the moon?

To continue with exploration, yes. Ultimately, the question is what country will be next to continue with the exploration of the solar system. Going straight to Mars is very risky without first performing the necessary tests with the correct operations. That is why I have always said that the only way to get to Mars is to test and run the systems for quite a long time on the moon. 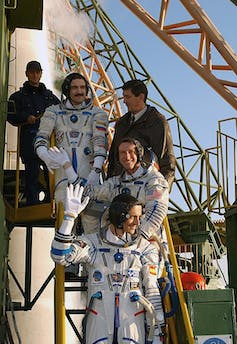 Pedro Duque (below) with Alexander Y. Kaleri and C. Michael Foale (centre) at the Soyuz Spaceport at the Baikonur Cosmodrome in Kazakhstan on October 18, 2003. NASA/Bill Ingalls

What project should humanity pursue today?

Most people want exploration to continue. The depths of the world’s oceans have still yet to be explored, and there will also be considerable interest in doing this. But great exploration – that which everyone understands – is the exploration of the other bodies in the solar system. Should we do it now or should we have done it 40 years ago? When man reached the moon in 1969, everyone thought that in ten or 15 years we would all be on Mars. If the Soviet Union had kept its space budget and NASA had not reduced its budget to one fifth of its amount in the 1960s, it would have been achieved. But the political powers decided that it was no longer necessary.

Will it be a race, like the moon landing, or a collaboration, like the International Space Station?

To get to the International Space Station (ISS), astronauts train in Russia, the United States, Europe, Canada and Japan. At the present time, with the current level of resources, exploration is unthinkable without international cooperation. Mutual support is necessary. In the 1960s, there was a race between two powers since both could do it alone. In the future, who knows? Humanity will continue exploring, and what each country and group such as Europe has to decide is how we want to get there, if we want that drive to develop our technologies and make us competitive, or not. 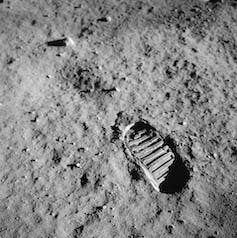 Close-up of an astronaut’s footprint on the lunar soil, photographed on July 20, 1969 on the Apollo 11 mission. NASA, CC BY-NC

What lesson do we learn from the moon landing 50 years later?

The lesson is that objectives which once seemed impossible can be achieved when the means are provided and when all knowledge is put forth to achieve them, as well as desire and enthusiasm. That is why the European Union is putting money towards mission programmes. These missions are not necessarily to Mars, but calling them “missions”, whether they be to cure cancer or stop climate change, is very important. The concept of a mission provides major impetus. The lesson is that we must seek measurable objectives, which are not too distant, and which excite everyone. That is how technology progresses.

This article was frst published in The Conversation. Read the original.