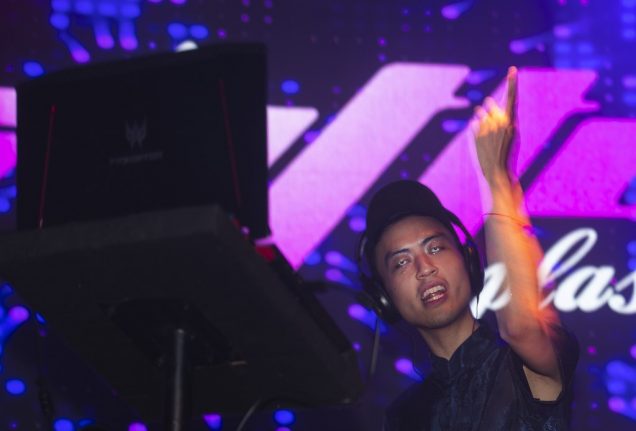 The 28-year-old gay, Asian-Spanish singer, DJ and writer is making a name for himself in Spain for his acerbic criticism of issues like racism in the LGBTQ community and beyond, the selfie generation and pride festivals like the one taking place in Madrid.

A qualified violinist and architect, Chenta created “putochinomaricon” two years ago in an angry nod to the insults he received in the street.

“I said, ‘that’s it’, I’m going to start accepting my body, accepting my identity,” Chenta tells AFP before a DJ set in Madrid.

He composed a short song and posted it on Instagram. Two years later, he has two albums and an autobiography out and has performed in major festivals like Sonar and Primavera Sound.

Slight and softly-spoken, Chenta weighs up every word he says, inclusive language peppering his interview, in sharp contrast with his eccentric performances and irreverent electropop songs.

“That you went to Majorca and stayed in the Ritz, that you feel alpha male and show off in the gym, that your father bought you a Ferrari so you can brag… We don’t really care about your fucking life,” he sings in one song.

‘You have yellow skin’

Born in Taiwan in December 1990, Chenta emigrated to Spain with his parents when he was just 11 months old.

He says his first experience of not feeling quite like others happened when he was around four or five, playing with a friend.

“I didn’t understand why he associated me with the colour yellow… and he told me, you have yellow skin, you’re different.”

And so it has continued, including in the dating scene.

“Either they reject you simply for seeing your photo and seeing you’re Asian, or they fetishise you and want to go out with you just because you’re Asian,” he says.

There is slang for that, he adds.

“Mashed potato,” for instance, refers to white homosexuals who only go for other white men, “rice queen” to non-Asian males who go for Asians.

All very food-oriented, Chenta notes, which inspired the title of his first album—“Steamed Pork Heart with Ginseng.” Chenta denounces discrimination generally within the LGBTQ community, which he says often favours white, muscular men who are not effeminate.

As for pride celebrations, he feels there is too little focus on “women, trans women, the disabled” or those from different ethnic groups.

But he’s starting to come around.

This year, Madrid Pride has chosen to focus on the 50-year fight for rights since the historic Stonewall riots in New York.

It will be the first such festival since local elections in May saw Madrid’s city hall swing to the right with the support of emerging far-right party Vox, which is strongly critical of the LGBTQ collective.

“I feel that in the current political environment, we have to group together rather than segregate,” Chenta says.

For Joan Luna, news editor at Spain’s Mondo Sonoro music magazine, the attraction of “putochinomaricon”—aside from his quirky performances and “very effective electropop”—is his discourse.

“The lyrics connect with people,” he says.

And then there is the novel fact he is an Asian electropop artist in Spain.

“As Asians, we’re seen as being good at jobs that aren’t tied to entertainment, like mathematics and science,” says Chenta.

The stereotypes are so ingrained his father believed them too.

“My father always had this absurd notion that if you were an Asian (migrant), you could only do three things, open a restaurant, open a pound shop or play a classical music instrument,” he says.

At the time, Chinese-US cellist Yo-Yo Ma was a reference.

So it was that Chenta ended up graduating as a violinist from Madrid’s Royal Conservatory of Music.

The only problem? He hates violin.

For a key exam he chose to sing a piece by the Danish-Norwegian pop band Aqua, but also played Polish violinist Henryk Wieniawski’s signature piece “Legende”.

“I passed with top marks.”