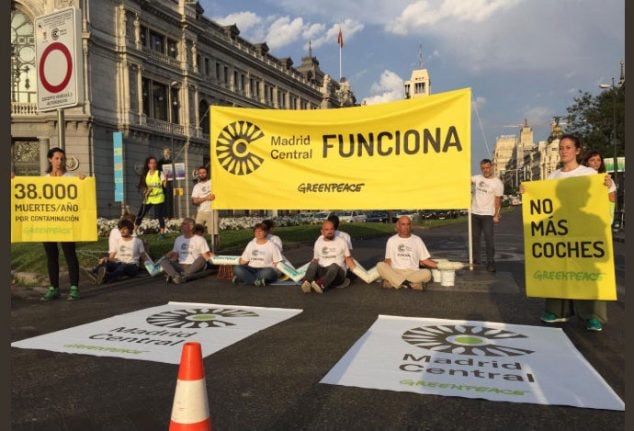 The “Madrid Central” scheme was introduced by left-wing mayor Manuela Carmena last November as one of the measures that persuaded the European Commission not to take Spain to court over its bad air pollution in the capital.

But Madrid's new conservative mayor Jose Luis Martinez-Almeida made ditching “Madrid Central” a priority during his campaign, saying it had done nothing to ease pollution and only caused a nuisance for locals.

But the reversal is proving deeply unpopular.

Over the last few weeks the Platforma en la Defensa de Madrid Central has been trying every technique to fight against the mayor’s bid to overturn Madrid Central, including marches, petitions and lodging environmental reports proving the benefits of the scheme. Their most significant event was on Saturday, when the protestors staged a march from Callao to the Town Hall, which was the biggest march dedicated to an environmental cause in Madrid’s history, involving some 60 thousand people. The group's aim is to use non-violent confrontation to protect Madrid Central transport restrictions.

A spokesperson from the platform, Juan Felipe Carrasco, 49, who had lived in Madrid his whole life, described how saddening it was to see so many cars in the centre again after having enjoyed a less polluted Madrid whilst riding his bike through the city in the past few months.

He said it made him want to move elsewhere, where the people in charge could be trusted with the important issues.

“I’m crying inside,” he told The Local after staging a protest that stopped traffic at Banco de Espana on Monday morning.

Carrasco, a member of the cycling association Pedalibre, affirms that even though Madrid Central’s restrictive zone was around 80 times smaller than London’s low emission zone, the traffic restriction laws still made a difference in the fight against climate change.

La Platforma en la Defensa de Madrid central has one basic demand: a meeting with the mayor to discuss the policy. But this request was made a week ago today and is still awaiting a response.

“Overturning of the emissions laws is a huge step back,” Carrasco said “It shows that right-wing politicians choose to go back to the nineteenth and twentieth centuries with their policies.”

“It's ignoring a crisis that results in 38 thousand premature deaths per year,” he said.