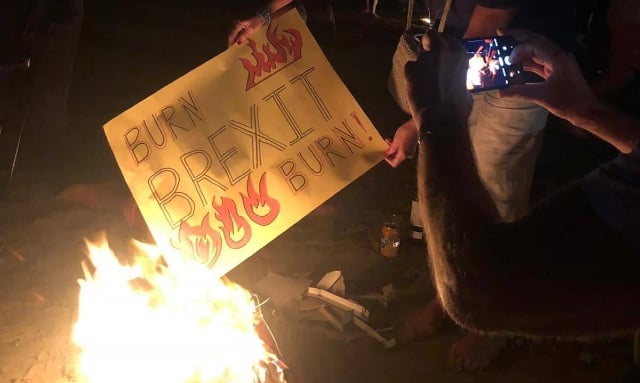 On Sunday 23 June, I joined my Spanish friends and neighbours on my local beach to celebrate one of my favourite Spanish festivals of the year – San Juan.

Originally a pagan festival, San Juan became a celebration of the birth of Saint John the Baptist, while harking back to its’ earlier roots of worshipping the sun – the provider of life.

I live on the Spanish Levante, where the event is celebrated with huge bonfires on the beaches. San Juan is a time of purification and renewal, and letting go of the past. Many people bring hand-written wishes to burn on the fire. Others use the bonfires to rid themselves of unwanted baggage, such as burning photos of an ex-partner. A few brave souls jump over the bonfires – originally a way to cleanse oneself. Now, it’s merely a show of bravado and a bit of fun. Most people prefer to surround the bonfires, talking, eating, drinking and socialising. It’s an event that brings the whole village together, regardless of age.

The main entertainment of the evening was provided by stilt-walkers, giving the audience an elevated display of twirling fireworks and flames. For most of us, the highlight occurred at midnight. After fireworks had been lit and paper lanterns, representing our hopes and dreams, were launched, the crowd headed to the water’s edge. With trouser legs rolled up and footwear discarded, we walked into the ocean and jumped, as one, over 12 waves. Over the years, I’ve heard different theories about the significance of jumping the waves and the required number of jumps. My favourite interpretation is that we have one jump for every month of the year, and I’ve now been cleansed of all my sins! I presume that includes my bad language.

Of course, for Brits living in Spain, 23 June is significant for another reason. It is the third anniversary of the Brexit referendum – an event that has dominated the lives of many people ever since that fateful day.

Some Brits who voted Leave have remained unconcerned about Brexit, believing – as they do – that little impact will be felt here. However, for those of us who want to remain in the EU, the fear and anxiety have been significant. Despite reassurances from all directions, nobody really knows what rights and benefits we might keep, as nobody knows what kind of Brexit will occur if, indeed, it occurs at all.

Any mention of a worst-case scenario, “no-deal” Brexit, adds to the stress and insecurity – especially when people are understandably concerned about any potential threat to their free healthcare and freedom of movement. So, the San Juan fiesta brings mixed emotions – a reminder of a life-changing event that still haunts our daily lives, and a celebration of joy and hope, shared with the locals. As I launched my paper lantern, I felt like a kid sending a Christmas wish to Santa Claus. I wasn’t wishing for the latest toy or gadget, but for a smidgeon of sanity in Westminster, and for the UK to have another say on its future.

My offering to the bonfire was a simple “Brexit” sign, as there’s nothing I would rather see crash and burn during the rest of 2019.

With our troubles going up in smoke and our wishes floating towards the heavens, we came away hopeful, grateful and feeling part of a local community of different nationalities.

That’s exactly how I feel about being an EU citizen. Long may I remain one!