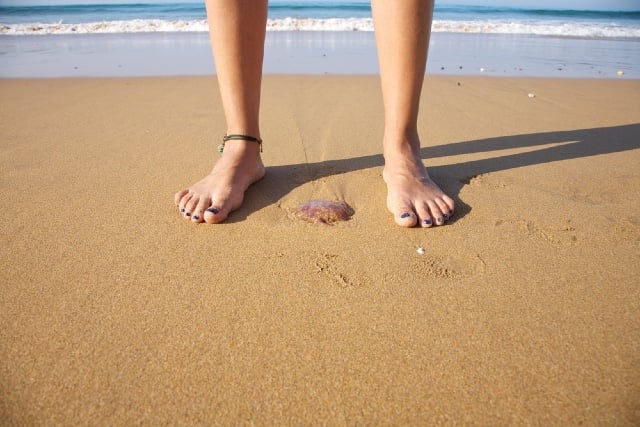 Man-of-war fish have stinging cells that are still active and capable of stinging even after the creature is dead and washed up on shore. So don't touch it.

Rule No 2: Listen to lifeguards

If the red flag is raised then don't go into the water. If you break that rule you may face a fine or even be stung by one of the creatures lifeguards are trying to protect you from.

If you are in the water then you may be stung without even seeing the culprit. The Man-of-war looks like a floating blue plastic bag but they have practically invisible tentacles that typically extend over 2.4 meters (8ft) under the surface of the water and sometimes stretch to 10 meters. Rule No. 3: Get help if you are stung

If you are stung then leave the water immediately and look for a lifeguard. If there are no lifeguards on the beach, wash the wound with salt water and remove any tentacles stuck to the skin by dousing the site with sea water.

Never use fresh water as that can actually cause the stinging cells, or cnidae, left on your skin to discharge, which could make the sting worse..

Don't touch the tentacles with your bare hands, and don't scrape them off your skin with objects like a credit card or razor, because that could increase pressure around the sting and make it worse.

Some experts suggest cooling the area down by applying ice for around five to ten minutes. You can also try wetting the wound with vinegar or baking soda dissolved in water.

Protect the area by using an antiseptic to avoid infections.

If the pain continues, make sure you consult a doctor.

Professor Josep Maria Gili from Barcelona's Institute of Marine Sciences warns against the common myth that urinating on a jellyfish sting can help ease the pain.

In fact, it might actually make the stings worse.

If you get stung by a man-of-war and you have trouble breathing, this could be a result of severe envenomation, and you'll need to see a medical professional immediately.