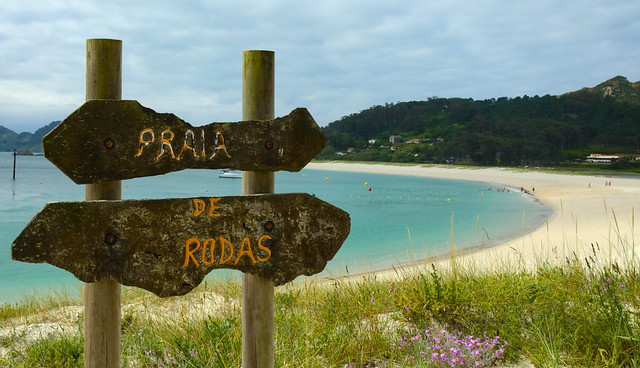 Fancy cooling down in the nippy waters of Rodas beach on the Cíes islands? Photo: Ferrvic/Flickr

These relatively unknown islets off Spain’s northwestern coast are dubbed the “Galician Caribbean” by locals, thanks to their idyllic white sand beaches and turquoise waters.

Heat haters will also be delighted to know that sea temperatures remain fairly cold during the hotter summer months, offering a proper temperature drop every time they go for a dunk in the Atlantic. If it’s shade you’re after, this national park in Spain’s northern Asturias region offers a dense canopy to keep you protected from the sun beating down.

If you don’t believe us ask the bears that roam Muniellos forest, as they also choose this spot to cool down in, given that the average summer temperature is just 19.3C. Even though higher altitudes generally offer lower temperatures, most of us prefer to spend our Spanish summers on the sizzling coastline, to at least be able to have a refreshing dip in the sea.

But what if you can have the best of both worlds? Mountain lakes such as Lago de Carucedo in Spain’s northwest interior offer just that, as well as some spectacular views. This stunning coastal town in Spain’s northern Basque region has made international headlines in recent years for being the film location of Game of Thrones’ fictional land of Dragonstone.

And though its choppy waters, rugged coastline and bleak winter weather may not seem ideal for beach bums, the average maximum summer temperatures are a refreshing 24.6C. Perfect to cool off. Spain’s capital, slap bang in the middle of the Iberian Peninsula, isn’t the ideal place to be during the sweltering summer months, especially for anyone who can’t handle 35C plus degrees without having to lie down.

There are plenty of public pools available, but to truly experience some freshness, the best bet is to head up to the nearby Guadarrama Mountains.

The town of Cercedilla, 57 kilometres from the city centre, has streams and natural pools that stay lovely and cold in summer. The southern region of Andalusia is a veritable frying pan in the summer. The hottest temperature ever recorded in Spain was in the Cordoba town of Montoro in 2017 – a sweltering 47.3C – but many other parts of Andalusia experience 40C+ temperatures every summer.

So is there any escape from the summer meltdown in Andalusia?

Los Alcornocales Natural Park, located between Cadiz and Malaga, is a real haven for shade seekers. Its dense forests and unvarying morning fog cover keep temperatures at an average 20C during July and August. The greenest and most mountainous of the Canary Islands is cooler on average than the other islands in Spain’s Atlantic archipelago, with average summer temperatures on the coast staying below 28C.

La Palma’s tourism industry is less developed than Tenerife’s, Gran Canaria’s, Lanzarote’s and Fuerteventuras, so if it’s peace, quiet and cool breezes you’re after this summer, La Isla Bonita as it is known has much to offer. You’re unlikely to find anywhere along Catalonia’s Mediterranean coast that stays cool throughout the summer, so once again it’s best to head to the mountain if it’s a drop in temperatures you’re after.

Aigüestortes National Park is one such place, although swimming in its rivers and lakes is forbidden unfortunately. That doesn’t mean you can’t look for accommodation with a pool, and the cooler mountain temperatures make it possible to take part in activities such as trekking, rock climbing and horse-riding.