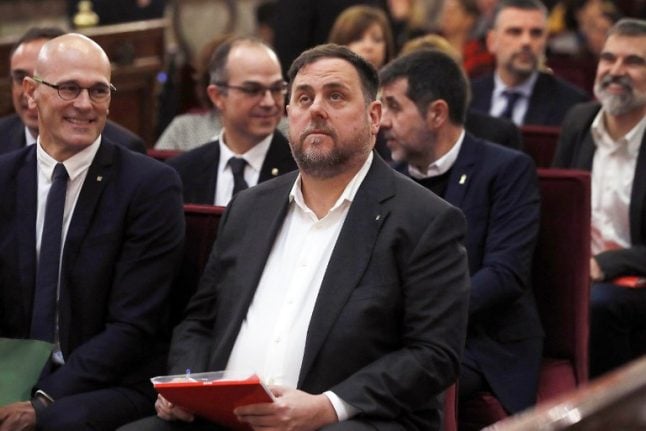 The court ruled against letting Junqueras out of custody on Monday to be able to go and swear respect to the Spanish constitution, a necessary step for all the winners of last month's  European elections before they officially become MEPs.

He faces a prison sentence of up to 25 years for rebellion and misuse of public funds over his role in a failed bid to prise Catalonia from Spain in October 2017, after a four-month-long trial that ended on Wednesday.

The sentencing of Junqueras and 11 other Catalan defendants is expected in the autumn.

The court said Friday's ruling wasn't “irreversible” but just a temporary postponement given Junqueras's legal situation, until the sentence is passed.

The court ruled that allowing him to go to the Monday ceremony would kick off a process that would then see him head to Brussels to be sworn in as MEP in the European Parliament's inaugural session on July 2nd.

That, the court argued, would put the whole judicial process “in irreversible danger” as Spanish authorities would lose “jurisdictional control” over the defendant, who has been in custody since he was arrested in November 2017.

The court argued that Carles Puigdemont, Catalonia's former president who fled Spain to escape arrest — and who was also elected to the European Parliament in elections on May 26th — was currently living in Belgium.

It noted Puigdemont announced setting up the headquarters of “the government-in-exile of the Catalan republic” in Brussels.

Junqueras was also elected as a lawmaker in Spain's national parliament in an April general election.

In that case, the Supreme Court allowed him out of prison along with several other co-defendants in the trial who were also elected MPs, to obtain their formal certificates and then again to take their seats in the parliament's inaugural session.

But they were all subsequently suspended from parliament due to their legal situation.