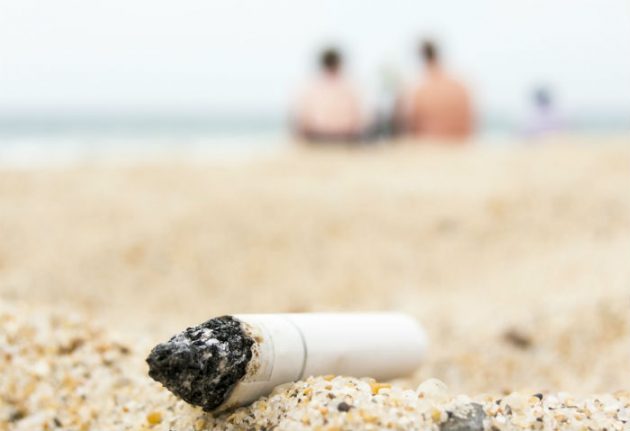 However, even on the cleanest beach there is every chance that you will find a cigarette butt as you dig your toes in the warm sand.

Aside from being nasty to find between your toes or when building a sandcastle, cigarette butts are also terrible for the environment and marine life.

A discarded cigarette butt is made of over 97% cellulose acetate (just a fancy word for plastic) and contains 4,000+ chemical toxins.

But things are changing, a nationwide movement against smoking has seen beaches across Spain designated as ‘smoke-free’ zones, with Andalusia becoming the latest region to consider banning smoking on certain beaches. After a pioneering trial by the Baiona town council in the province of Pontevedra, a smoke-free initiative spread through the rest of the region.

According to the Xunta, 2018, Galicia remains the region with the highest number of smoke-free beaches in Spain with a total of 79 designated.

In 2006, Catalonia became the first region to designate a “smoke free” when L’Escala beach in Girona province came up with the plan. Since then, it has been extended to a total of eight beaches in the region, although no fines are imposed on those caught having a puff. The beaches designated as smoke free are Sant Feliu, Sant Pol,  Canyerets, in Sant Feliu de Guíxols, Playa de Ocata, in El Masnou, Playa de Sa Boadella, Canyelles, Treumal and Fenals, in Lloret de Mar and Playas de L'Escala.

Last summer, Motril, on Granada’s Costa Tropical carried out a pilot study to make its beaches tobacco free. The scheme was such a success that Andalusia is considered rolling it out to other beaches.

Jesus Aguirre, the regional health minister of Andalusia, announced plans last week on International No Smoking Day. He said residents will be asked to support the scheme at their local town hall, and those councils who want to participate will be given the support of the regional government.

The hope is that the initiative will promote healthy living, diminish contamination and improve the overall look of the beaches. .

Asturias is designating beaches as smoke free for the first time this summer.

Beaches in two distinct areas of Asturias are involved in the trial, which could be extended throughout the region next year.

Thanks to a 2018 initiative, Murcia currently has 9 smoke-free beaches, with the aim of educating the population about the harmful effects of consuming tobacco and cannabis.

The idea, proposed by the region’s ministry for health, which hoped to promote a healthy lifestyle, is that if the beaches prohibit smoking, abstention from smoking will become the norm.

With the intent of promoting a healthy environment alongside healthy habits, the Councils of Health and Environment “aim to base their smoke-free policies on responsibility and respect, instead of norms and sanctions”. In other words, no fines will be imposed but a public awareness campaign will be in place.

There are currently 2 smoke-free beaches in Ibiza, but it is hoped that additional coastal municipalities will follow suit, to raise awareness of the need to protect natural spaces.

The island of Gran Canaria in the Canary Islands is way ahead of the curve when it comes to seaside smoking.

It has imposed strict fines to ensure smokers are sanctioned for lighting up on its 11 designated smoke free beaches.

In the Mogán area which has 10 smoke free beaches,, fines can reach up to €400 for smoking while on the beach, and a whopping €1,800 for discarding a cigarette butt onto the beach.

A recent survey in Gran Canaria, which issues fines of up to €300 to those caught smoking on  its Las Canteras Playa, a designated “smoke free” beach, revealed that 90 percent of citizens wanted an outright ban on smoking on the beach.

Valencia, Basque Country and Cantabria are the other of Spain's regions which coastal areas but none of the three have designated smoke free beaches as yet.

Valencia plans to run a scheme to see if councils want to introduce designated smoke free zones but none have yet been declared.