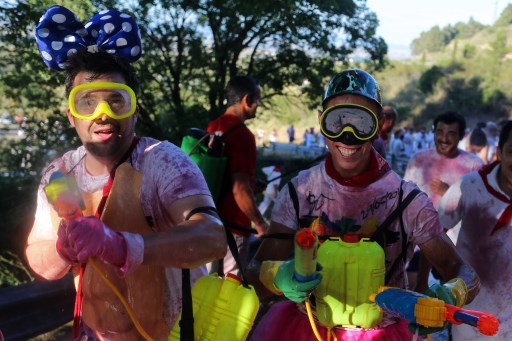 A battle where the weapon is wine takes place in La Rioja. Photo: AFP On June 23rd, the people of Spain celebrate the beginning of summer with traditional music and dance as well as parades and street performers. Each region celebrates San Juan in its own way, but in A Coruña, in the Region of Galacia, the solstice will be celebrated with a roaring bonfire and a fiesta into the early hours of the morning. In June, people across the world celebrate Gay Pride. Although Madrid’s famous parade isn’t until July 6th, the city will be bursting with colour from June 28th, when Pride Week begins. Performances, concerts, parties and expositions will salute the LGBTQIA+ community. This year also marks the 50th Anniversary of the Stonewall Uprising, which signified the beginning of LGBTQIA+ liberation across the world. At 8am on June 29th in La Roija, two teams of villagers will celebrate the feast of San Pedro by soaking each other in litres of wine, a spectacle which dates back to the sixth century when pilgrims to the region would enjoy a feast after mass with great quantities of wine.

Between June 3rd and June 9th, the city of Mérida in Badajoz travels back in time to the 1st Century AD as it celebrates its Roman past with performances in the amphitheatre, fashion shows, a Roman market and the opening of monuments through the night. Originating in 1883, this festival of music and dance is a historic event involving an array of performances including chamber music and ballet shows as well as workshops in music, dance and photography. It takes place in the Andalusian City of Granada, showcasing performing arts in striking venues such as the Palicio de Carlos V.

The annual Azkena festival will welcome Stray Cats as part of their 40th Anniversary tour this year as well as The B-52s, Wilco, and The Cult, offering a full weekend of rock in the Basque Country. Ed Sheeran continues his “Divide” tour with extra dates across Europe this summer, including gigs in Barcelona and Madrid, with support from two brilliant artists: James Bay and Zara Larsson. Sabiñánigo in the province of Huesca once again hosts the “Quebrantahuesos” this year. The exhausting 205km cycle race demands a spectacular ride through some of the harshest mountain passes in Pyrenees, testing the resilience of around 8,000 athletes from all over the world. Since 1992, the Barcelona-Catalunya circuit has played host to the Catalonia Motorcycle Grand Prix. In the two days prior to the big race on June 16th, training sessions and classifying stages can be watched, all taking place just north of the city of Barcelona.

An exhibition at entitles “Pioneers. Women of the Russian avant-garde” is entering its final weeks in The Museo Nacional Thyssen-Bornemisza in Madrid, presenting the work of a selection of prominent female artists from the 20th century cultural resistance in Russia. The display’s curator will be giving a free talk on the featured artist at 6pm on June 5th.

READ ALSO: The intern's guide to surviving a summer in Spain