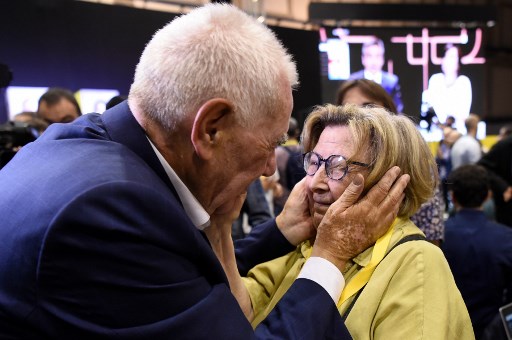 On the domestic front, the Socialists did well in local and regional elections. They came first in 10 of the 12 regions that went to the polls.

That is a leap from the last regional elections in 2015 when they only won two of the regions, even if they lack the absolute majority in most areas and will have to form alliances to govern.

This is good news for Pedro Sanchez who is in an even stronger position when negotiating to form a government, after the Spanish Socialist Party (PSOE) won the most votes in the general election on April 28th but failed to win a majority.

“The PSOE, after the results on April 28th, has been confirmed as the biggest political force by far in Spain's political system,” Sanchez said.

The PSOE won 29.26 percent of the vote in municpal elections nationally, compared to 22.23 percent for the PP.

Socialists have increased hold on municpalities as seen in provinces map of Spain, 2019 compared with 2015. DATA: Ministry of Interior

So what does that mean going forward?

Sanchez's preferred plan is to form a minority government with the support of other parties on a case-by-case basis when passing laws.

But while Sanchez wants to rule alone, Pablo Iglesias, the leader of far-left party Podemos, is pushing him to form a coalition.

But with Podemos having performed badly in the local and regional polls, Iglesias may not have enough weight to pressure Sanchez into accepting this.

Socialists miss out on Madrid prize

It was predicted that, for the first time in over 20 years, the Conservatives might lose their stronghold of Madrid and that the a left grouping led by the Socialists with support from Podemos and Mas Madrid could win enough to secure a majority. But that didn't quite happen.

The Socialists won the largest share with 37 seats but even with Mas Madrid's 20 seats and Podemos's seven, a coalition of the left would still fall short of the magic 67 seats needed to form a majority in the regional chamber.

The People's Party (PP) won 30 seats, a huge drop on the 48 last time round, but the support of Ciudadanos with 20 seats and the far right VOX with 12 secures 68 votes for the grouping.

This was a boon for the PP, which suffered disastrous results at the general elections, and gave leader Pablo Casado a reason to celebrate. If the PP had lost Madrid it might have been difficult for Casado to cling on power as leader of the party.

“There is only one PP, and the Spanish people have decided to vote for the original,” proclaimed a euphoric Casado at PP headquarters in Madrid when results came in.

“We are the big party in Spain. The PP will be here for decades.”

Madrid City Hall bounces back to the right

Madrid will once again have a conservative mayor after right-wing parties together won the majority of the vote. As in the regional parliament of the Community of Madrid, City Hall will now be run by the PP in a pact formed with Ciudadanos and Vox.

Mayor Manuela Carmena, a 75 year-old grandmother and retired judge who swooped to power on the back of the indignado movement in May 2015, conceded defeat on Sunday despite leading the party with the biggest share of the vote.

Madrid Mas won just 19 seats, so even with the support of the PSOE and their eight seats would still fall short of the 29 needed to form a majority on the council.

The new mayor will be José Luis Martínez Almeida of the Popular Party. Ada Colau missed out on a second term as Barcelona mayor. Photo: AFP

Ada Colau, a former housing activist who became mayor of Barcelona in May 2015, also lost out. She was pipped to the post by Ernest Maragall, a veteran politician from the Catalan Republican Left (ERC) which wants Catalonia to breakaway from Spain.

Both Colau's ‎Barcelona en Comú party and ERC won 10 seats each on the 41.strong council but Maragall beat her by just under 5,000 votes, which gives him first shot at forming a council

France's former prime minister Manuel Valls meanwhile lost his bet to become mayor of the Mediterranean seaside city in Catalonia, coming in fourth with just over 13 percent of the vote.

READ MORE:  Catalan separatists leaders (one in jail and one in exile) win seats in EU parliament Although the share of the vote that went to Vox dropped in the EU elections when compared to the general election last month – from 10 percent to just over 6 percent, giving them just three seats – the party did very well on a regional and local level.

They will support the PP in governing the Madrid region and Madrid City Hall, but it is in rural areas that they really did well.

Support for Vox on a local level has grown enormously since the last municipal elections in May 2015.

In the last elections they won a meagre 22 councils across Spain but this time round have secured 530 seats and taken control of five councils. The big losers have to be Podemos and Pablo Iglesias whose leadership of the radical left party will be open to scrutiny.

Although the party holds 42 seats in Spain's lower chamber and whose support is essential to Pedro Sanchez, the group's poor results in Sunday's triple vote will weaken their bargaining power.

Data from the Interior Ministry showed Podemos had scored just 1.6 percent of the vote, behind Vox which won 2.9 percent.

While Eurosceptic parties have surged forward in other countries across the EU, the votes cast by Spanish voters show that Spain is, on the whole, pro-EU along with its neighbour Portugal as well as Ireland, Denmark and the Netherlands.

READ MORE: Spain proves it's more pro-Europe than ever and bucks the trend in EU