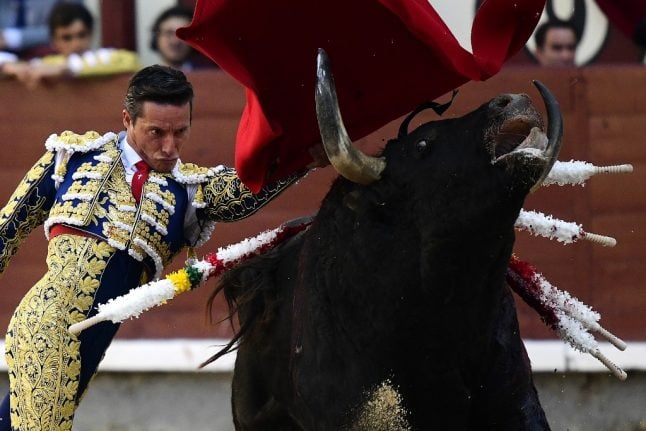 Bulls enter the arena weakened by toreros who drive pikes and "banderillas" -- coloured darts -- into it, drawing blood. Photo: GABRIEL BOUYS / AFP
Around 500,000 enthusiasts are expected to descend on Madrid's Las Ventas arena during the month-long Feria de San Isidro, the Spanish capital's biggest bullfighting festival. But now more than ever, activists and politicians are getting involved as regional and municipal elections loom on Sunday.
Madrid's outgoing left-wing mayor has promised “corridas” (bullfights) “without blood or death”. But the conservatives and far-right defend a “tradition” associated with Spanish identity. To make their point, they enlisted three “toreros” (bullfighters) as candidates for April's general election.
“I don't know anyone who loves the fighting bull more than the torero,” says Casas, a 71-year-old former matador, as he strolls through Las Ventas, built in 1929. It “is never an enemy for the torero but a glorified partner.”
In a corral next to the ring, visitors measure up these “fighting bulls” that have been reared solely for combat and sometimes weigh more than 600 kilos.
“If I had to be an animal, I wouldn't want to be a kitten or a doggie but a fighting bull,” says Casas. “I'd die, yes, but… I would make my destiny glorious.” Spectators follow a bullfight at the Las Ventas bullring during the 2019 San Isidro festival in Madrid. Photo: GABRIEL BOUYS / AFP
Operating room and abattoir
Every day, representatives of the toreros pick at random the bull that will face off with each matador that evening in a solemn ceremony that involves picking papers out of a hat.
“That's the way it's been done since the 19th century,” says Casas.
In his office, paintings and photos pay homage to toreros killed by bulls: Joselito in 1920, Manolete in 1947… Before a fight, rare are the matadors — those toreros tasked with killing the bull — who don't pass by the chapel in Las Ventas to pray. Nearby, two operating rooms are on hand for injured toreros.
As for the bull, it will die unless it receives an extremely rare pardon — “because you have to follow things through otherwise it becomes a performance and not a ritual,” says Casas.
Bullfights that involve killing the bull in the ring are legal in Spain, part of France, Mexico, Colombia, Peru, Venezuela and some of Ecuador. In Portugal, it's illegal but the bull is slaughtered afterwards.
'He killed it badly'
On this spring day, the Las Ventas ring is teeming with close to 24,000 people. “Long live Spain” shouts the crowd as former king Juan Carlos I joins onlookers.
First off, the bull is weakened by toreros who drive pikes and “banderillas” — coloured darts — into it, drawing blood. Then a flourish of trumpets announces the entrance of the matador who has 10 minutes to finish the bull off.
“Ole!” “Good!” The matador is applauded when he manages to attract the bull into circles around him, standing close to its horns. Suddenly thousands of white handkerchiefs rise in the audience: “a bull was very valiant, it was killed at once, the public is asking for an ear” as a reward for the torero, explains Antonio Mercader, a 54-year-old economist and enthusiast.
Onlookers whistle with disapproval at another matador as “the bull suffers too much,” adds his wife, Paqui Fernandez, pulling a face. “He killed it badly.”
The 'art of killing'
Protesting for the “abolition of bullfighting,” activists estimate that some 200 bulls will be killed during the Feria of San Isidro, and thousands in the whole of Spain this year.
Calling corridas a “show of cruelty,” author Manuel Rivas published an opinion piece earlier this month asking Spain to renounce the “art of killing.”
However, bullfighting, part of Spain's cultural heritage list, appears untouchable. Its ban in Catalonia in 2010 was overturned by the Constitutional Court. In practice, however, corridas no longer take place in the northeastern region, nor in the Balearic and Canary Islands.
In 2008, 810 bullfights took place across Spain. Ten years later, there were only 369, according to the culture ministry.
“Don't leave bullfighting high and dry,” pleads this year's poster for San Isidro.
It is a poster that appealed to Eladio Galan, a 25-year-old pharmacist who wonders whether bullfighting will still exist in 30 years.
“I have friends who are indifferent, others who tell me: 'you're heartless'.”
By AFP's Laurence Boutreux