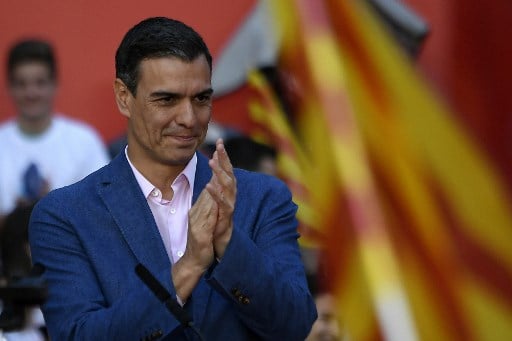 The polls are seen as the “second round” of an April 28th general election, in which Sanchez's Socialists came on top but without a majority in parliament.

He is hoping the party will perform well so he can go ahead with his preferred plan to form a minority government that seeks support from other parties on a case by case basis to pass legislation.

But the leader of far-left party Podemos, Pablo Iglesias, is pushing Sanchez to form a coalition government, though the two parties together cannot command a majority.

“The Socialists might need the support of Podemos to retain power in some regions, which Iglesias might use to pressure Sanchez into forming a coalition,” said Teneo analyst Antonio Barroso.

“If the distance between the two parties widens after Sunday, Sanchez will be in an even stronger position to head a minority government.”

Sanchez has urged his supporters to “finish the work” of the general election and turn out in force to vote against the conservative Popular Party (PP) and centre-right Ciudadanos which is seeking to supplant it as the main opposition party.

Polls suggest the Socialists will come out on top in most of the 12 regions going to the polls on Sunday but all eyes will be on Madrid which could swing left after being governed by the PP for 24 years.

In the European parliament elections Spain — which has not seen a rise in support for eurosceptics like in some other nations — is poised to be the only major European Union member state where the Socialists come out top.

Polls suggest it could capture around 30 percent of the vote, 10 percentage points more than the PP, its nearest rival.

Far-right party Vox, which burst into parliament after April general elections, is expected to win between six and eight percent of the vote.

Sanchez has emerged as the big hope of European social democrats, the second largest bloc in the European Parliament behind that of the conservative European People's Party (EPP) group.

He has been tasked with negotiating on behalf of the social democrats the distribution of key posts in European institutions such as the European Commission and the European Central Bank (ECB).

Spain hopes to secure one of these key posts. It currently only has one vice-president in the ECB and holds only one of the EU Commission posts.

Borrell, a former president of the European Parliament, heads the Spanish Socialist party list for the European elections.