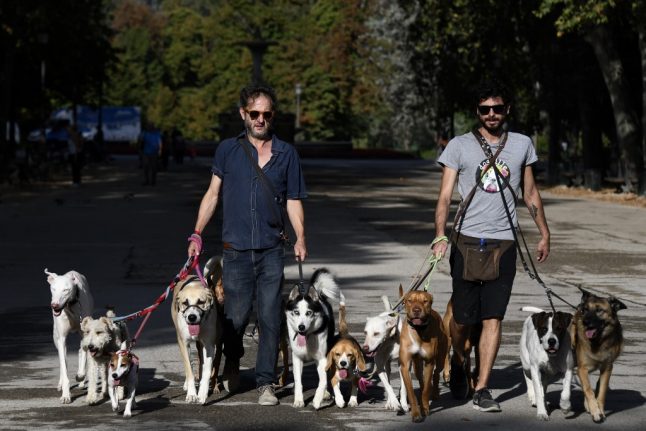 Dog walkers in the Retiro park in Madrid. Photo: AFP

According to figures from the Spanish Network for the Identification of Pets (REIAC) there were 13 million registered pets in Spain last year and the numbers are rising.

Indeed the number of registered dogs, cats and rabbits in Spain has rocketed by 40 percent in the past five years alone.

Solis says there are now more pets in Spain than children aged under 15.

The Local reported recently that in the region of Asturias alone, the number of households that now include a dog have outpaced those that include humans under the age of 18.

But that doesn't tell the full story as not everyone will register their pet officially, even though every dog and cat has to have a microchip according to Spanish law.

And the reason for the huge jump in the number of cats and dogs in Spain?

Solis, a vet, points to the huge and growing number of people living alone in Spain. According to a recent study conducted by the National Statistics Institute (INE), more than two million people over the age of 65 live alone in Spain.

One reason, according to him, is the social factor and therapeutic effect the animals have on humans.

“People who live alone find company in their pet, someone who understands them and that they can talk to, someone that makes them leave the house and talk to other pet owners,” Solis told El Commercio recently.

A study carried out by the medical research charity Harrison's Fund some years ago found that in some situations, people are more willing to help a needy dog than a child and feel more empathy in general towards the animal than a grown-up human. The reason, as the researchers suggested, was mainly the perceived helplessness of the dog in contrast to the human.

But it's not just about more people living alone. What is notable about the growing number of pets in Asturian is that they coincide with a decline of young people and birth rates: According to data from El Comercio, the number of dogs has been increasing steadily by about 10 000 every year over the last decade.

At the same time, the percentage of children and adolescents diminished and since 2017, dogs officially outnumber young people living in Asturia.

Spain was not always a nation with a low birthrate. During Franco's dictatorship, big families were encouraged and by 1976,  Spanish women had an average of 2.8 children, one of the highest numbers in Europe.

Over the next decades, the birth rate first declined, then grew again until the economic crisis began in 2008. Between then and 2015, it went down by 19.4 per cent.

But Spaniards don't only have fewer children, they also have them later than they used to – and later than other Europeans. While the mean age of the mother at the birth of the first child in the EU was 28.8 years, Spanish women had their first kid at the age of 31.9 years.

But the huge rise in the number of pets in Spain is not all good news for animals. Spain also has a sorry record when it comes to abandoned pets.

In 2018 there were 138,000 dogs and cats abandoned, according to the Affinity Foundation.

Solis believes things are improving slowly but says there is still a long way to go to meet the level of countries like Holland, Belgium or England, when it comes to caring for pets.