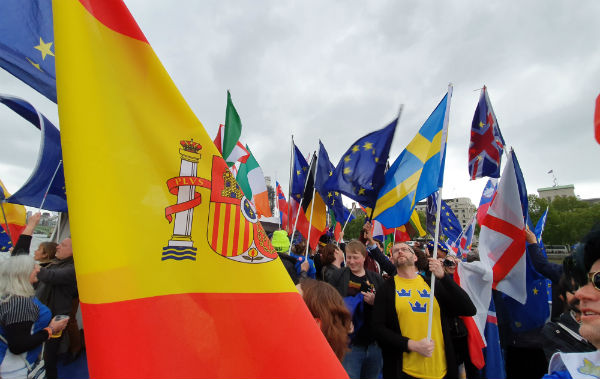 On May 9th, Bremain in Spain celebrated Europe Day by taking a rare break from campaigning against Brexit. 70 years after the foundation of the Council of Europe, it seemed an appropriate occasion to give us all a day off from Brexit, and also to take stock.

We invited our 5,500+ Facebook group members to tell us why EU citizenship is important to them, and which benefits of EU membership they value the most.

Many members described benefits that affect the majority, while others talked about their own specific circumstances. We hadn’t anticipated receiving so many personal histories, many dating to the time before the UK joined the EU.

As expected, peace across Europe was widely considered important, as was freedom – especially our own freedom of movement.

Sandra Stretton, a retiree based in La Linea, described travelling to many different European countries during her previous career and the joy of mixing with different nationalities and cultures, even if a language barrier existed. Today, Sandra is fluent in Spanish and is fully integrated into the Spanish community. Her disabled dog, Diva, is something of a local celebrity. Sandra says: “I will never forget those special memories, or how freedom of movement gave me the best education I could have wanted.”

Michael Soffe, a resident of Malaga, talked about the difficulties of finding a decent job in Spain before the UK joined the EU, because of the need for working visas. He was required to leave Spain every 90 days to have his passport stamped. He said: “I cannot express how proud I was when I gave my fingerprint at the local police station to receive my first residencia card. Being completely European gave me a sense of belonging and security.”

Spanish Bremain in Spain member, Ana Cavero, told the flipside of the story: how she could study in the UK through the Erasmus scheme, before taking an internship in Germany. Ana, who is now a permanent resident of the UK and a British citizen, said: “We should all be able to spend our lives wherever we are happiest. I’ve had so many great opportunities, being European, that I wouldn’t want a single young person to miss out.”

Karen Watling, from Torrevieja, expressed a sentiment that applies for many of us: “Europe Day – what does that mean to me? Everything! My life, my family, my all is in Europe.”

Speaking for myself, I was in London for Europe Day. I spent the evening on the annual Europe Day Boat Trip along the River Thames. It was a colourful affair. Passengers were supplied with flags for all European countries, as well as EU flags. Many were dressed in pro-EU blue and yellow outfits, and some were dressed as pirates. The on-board pirates included EU Supergirl, Madeleina Kay, who sang and played the guitar.

The cruise took us to the Houses of Parliament, where we participated in anti-Brexit chants, providing entertainment to passers-by. Although I enjoyed celebrating Europe Day in the UK, our members’ moving Facebook posts made me want to return to my home, in Spain.

Whether EU membership benefits matter to us personally or collectively, our jobs, families, friends and lives are here in Spain. It’s a special place to call home, with many of the Spanish community welcoming us into their lives and considering us part of their European family.

I’m sure you’ll agree: that is really something to treasure and celebrate on Europe Day.