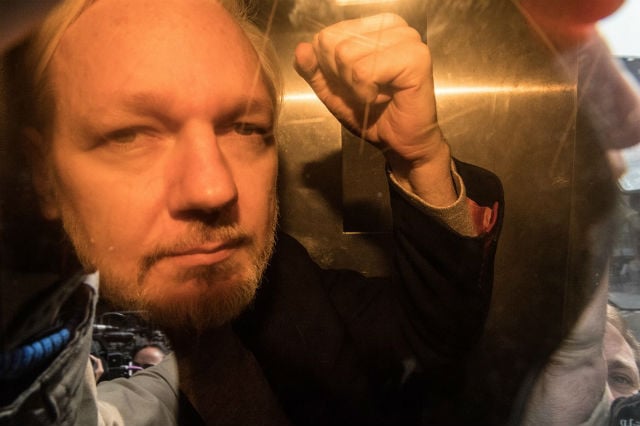 WikiLeaks founder Julian Assange arrives at court in London on May 1, 2019 to be sentenced for bail violation. Photo: Daniel Leal-Olivas / AFP
The journalist is one of several Spaniards claiming they have videos and personal documents of Assange from when he was in Ecuador's embassy in London. The source, who refused to be named, said the man was detained, questioned by a Madrid judge and released pending further investigation on Wednesday.
That followed a complaint made to the police by Kristinn Hrafnsson, WikiLeaks editor-in-chief, the source added. The source was unable to confirm that others had also been detained and released, as reported by Spanish media.
Lawyers for Assange have also filed a court complaint in Spain against the journalist and several others they allege tried to extort the WikiLeaks founder, whom they say may have been the victim of “espionage” in the embassy.
READ ALSO: Spanish ring 'tried to extort €3m from Wikileaks': Assange lawyers
The 47-year-old, who for seven years lived holed up in London's Ecuadoran embassy where he had taken refuge to avoid extradition to Sweden on rape accusations, was arrested on April 11 after Quito terminated his asylum.
On Wednesday, he was sentenced to 50 weeks in jail for breaching a British court order when he took refuge in the embassy.
According to Spanish media, the Spaniards somehow obtained videos and personal documents of Assange via a surveillance system that included security cameras set up in the embassy in London.