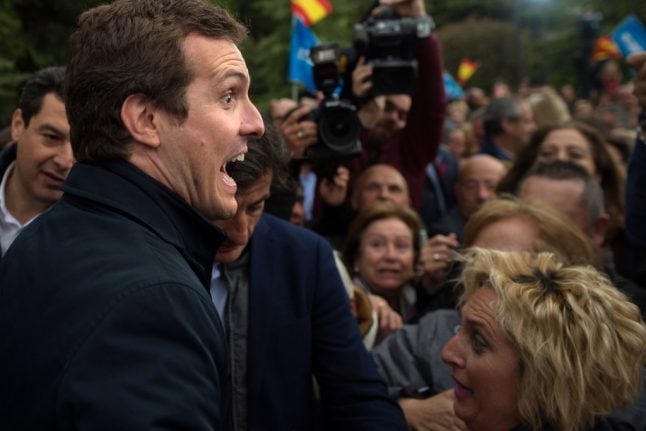 Pablo Casado has been the PP's least voted leader ever in Spanish general elections. Photos: AFP

Spain’s Popular Party, once the default choice for conservatives in the country, on Sunday recorded just 16.7 percent of the vote in the country’s general elections, giving it a lowly 66 seats.

The party headed by 38-year-old Pablo Casado have lost more than half of their seats since 2016 (137 down to 66, a record drop and record low), with centre-right Ciudadanos making major gains (from 32 to 57) and radical-right outsiders Vox barging into national politics (0 to 24 seats).

That’s in stark contrast to the PP’s landslide victory in 2011, when crisis-hit Spain gave Mariano Rajoy 44.6 percent of the vote (186 seats), the party’s best ever general election result.

Why has the PP done so badly?

A lot can happen in eight years. For the PP, this time period has been largely spent fending off allegations of corruption which have seen them, the Socialists and the country’s political status quo as a whole called into question.

This lack of confidence in the political establishment saw the emergence of left-wing Podemos and centre-right party Ciudadanos, the latter starting to nibble away at the PP voter base in the 2016 general elections with 14 percent of the vote.

In May 2018, a motion of no confidence forced Mariano Rajoy to stand down after Spain's National Court ruled that his party had profited from funds obtained illegally through “an authentic and efficient system of institutional corruption” including a slush fund.

But it was perhaps the recent irruption of far-right newcomers Vox that has caused the most harm to the ‘Populares’.

Founded by a former member of the Popular Party (PP) – Santiago Abascal – Vox have routinely accused the PP of going soft on pressing issues such as immigration and the separatist cause in Catalonia.

Conversely, Ciudadanos’s leader Albert Rivera has continued to gain the support of younger conservatives with more moderate views on matters such as religion and women’s rights compared to the PP’s traditional stance.

This fragmentation of the Spanish right has resulted in the PP losing votes on the edges of each side of the conservative spectrum. The situation has not been alleviated either by the choice of Pablo Casado as new PP leader, a hard liner in principle who opposes euthanasia and Catalan independence, but who in practice doesn’t have the charisma of Abascal or the progressiveness of Rivera.

When have Spain’s PP reached power?

In 1996, Spain’s Popular Party edged past the socialists with 9.7 million votes, only 300,000 more than the PSOE, allowing Jose María Aznar to take power and become the country’s first conservative leader in post-dictatorship Spain..

But the tables turned for Aznar’s party in 2004 with a shock victory for the country’s socialists, just three days after the Madrid train bombings cost 193 people their lives.

The Socialists governed in Spain until 2011, after which Mariano Rajoy took office for the Popular Party following a landslide election win. Rajoy was Prime Minister until he was ousted in 2018.