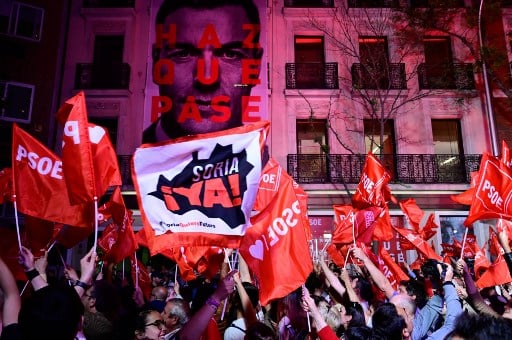 Celebrations outside PSOE headquarters as the results come in. Photo: AFP

The PSOE – which hadn’t won the biggest share of the vote in a general election since 2008 when Jose Luis Rodriguez Zapatero won a second term – could now form a government with the support of Podemos and the help of smaller regional parties including the PNV – Basque Nationalists, which are both natural allies. Number of seats for each party with 93.66 percent of the vote counted.

No need to court Catalan vote

In contrast to initial predictions, the results show that the PSOE may be able to govern without support of the Catalan regional parties – removing a thorn in the side of Pedro Sanchez.

Remember, Pedro Sanchez won the confidence vote that ousted Mariano Rajoy thanks to the support from Catalan separatist groupings, but they ultimately provoked the need for early elections after failing to support the last budget in anger at the trial of their separatists leaders in Madrid.

Governing without the need of support from Catalan separatists will remove a major headache for the PM.

There is also the option of a strong centrist alliance if Ciudadanos chose to support Pedro Sanchez as PM. Although Albert Rivera spoke during the campaign of partnering with the PP, and emphasized the need to “chase the socialists from power”,  a possible alliance between the two may yet be possible.

For the first time since Spain’s transition to democracy, seats have been won by a political party with a far-tight agenda. Vox have burst onto the political scene and looked set to win 24 votes.

Their presence has served to fracture the right wing vote and can be largely blamed for devastating support for the Popular Party.

It marks a meteoric rise for a party with less than 1 percent of the vote in the last general election to over 10 percent, largely due to its ultra-nationalist rhetoric that advocates the “defence of the Spanish nation to the end” and a hard line against separatists in Catalonia.

But, it’s a hollow victory as they won’t be the anticipated king-maker they hoped to be, propping up a right-wing coalition government.

Drubbing of the PP

The big losers of the night are the conservative Popular Party and it's 38-year-old leader Pablo Casado, who stepped into the shoes of ousted Martiano Rajoy. Will he resign over the result?

READ MORE: Why has Spain's longstanding right-wing party lost so many votes?

The turnout was a whopping 75 percent, bigger than ever registered before and a clear 8 points up on the last election in June 2016. Commentators remarked that the high turnout was due in part to the mobilization of voters on the left to limit the impact of Vox.

READ ALSO: Results: Victory for Socialists but need to support to govern