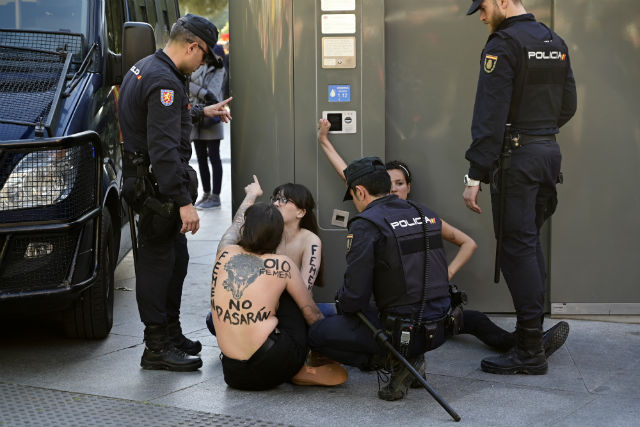 Police guard Femen protesters as they disperse the protest. Photo: Javier Soriano/AFP
With the anti-Franco slogan “They shall not pass” daubed on their naked breasts, three of the feminist activists got on stage at the capital's Columbus Square before the arrival of Vox leader Santiago Abascal
The women shouted “It's not patriotism, it's fascism”, a message that was also written on their bodies.
They were arrested and taken away to the boos of Vox supporters. Since the death of dictator Francisco Franco in1975, Spain had been one of the few European countries with no far-right party to speak of.
Police carry away a woman painted with the slogan “It is not patriotism, it is fascism”. Photo: Javier Soriano    ¨
But in Sunday's elections Vox, with its ultra-nationalist rhetoric, could make a dramatic entrance in the national parliament, gaining some 30 lawmakers out of 350, according to polls.
Practically non-existent in opinion polls a year ago, Vox leapt onto the scene in December regional elections in Andalusia, taking nearly 11 percent of the vote.
Its support was key to helping the conservative Popular Party (PP) and centre-right Ciudadanos take power in the southern region that had traditionally been a socialist bastion.