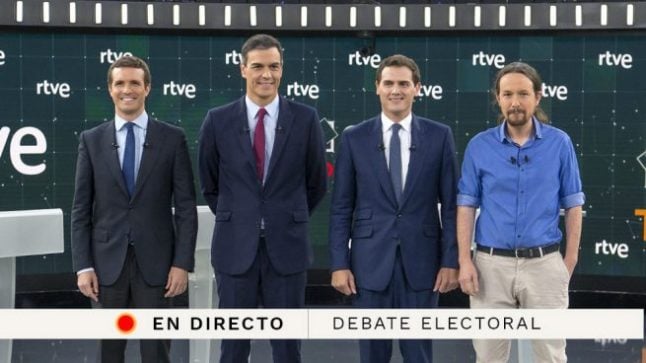 “Those who want to break up Spain have their favourite candidate in Sanchez,” Casado said, standing behind a lectern in the studio, the three other candidates in a semi-circle next to him.

“I want a prime minister who doesn't kneel down in front of those who want to break Spain,” added Rivera, a framed photo of Sanchez talking to Catalonia's separatist leader Quim Torra on his lectern in front of him. The northeastern region's independence drive is an explosive issue ahead of these early elections, which Sanchez called after his minority government failed to get support for its 2019 budget.

Casado and Rivera both accuse Sanchez of betraying Spain for attempting to negotiate with Catalan separatists since he came to power in June after ousting then conservative prime minister Mariano Rajoy with a no-confidence motion.

They also accuse him of cosying up to Catalan separatist lawmakers in the national parliament who supported the motion to oust Rajoy and were key to propping up Sanchez's minority government.

Their refusal to back the budget prompted the early elections.

Sanchez defended himself, stressing he would never give his consent to an independence referendum.

But he insisted dialogue was the way forward to avoid a repeat of a failed secession bid in October 2017 marked by an illegal referendum.

Exasperated, he said: “I've been putting up with all these lies for 10 months — that I've agreed to a referendum, that I've sold Spain…”

Equally exasperated was Iglesias, whose far-left party worked with Sanchez in his 10 months in power.

“This debate is being watched outside Spain,” he said, the only candidate to opt for a casual shirt and trousers rather than a suit and tie.

“I think this debate is serious enough for us not to show each other photos or throw paper at each other, and talk with a bit of seriousness.”

Sanchez too went on the offensive, accusing Rivera and Casado of cosying up to far-right party Vox, which burst onto the political scene in December regional elections in Andalusia. Having won 12 seats in Andalusia's regional parliament, however, the ultra-nationalist and anti-immigration party's support was key to helping the PP and Ciudadanos take power in the southern region that had traditionally been a socialist stronghold.

Sanchez warned that could happen at a national level.

“I thought that (Donald) Trump wouldn't win and he won. I thought Brexit wouldn't happen and it did,” he said.

“I thought that in Andalusia the PP, Ciudadanos and the far-right wouldn't reach agreements and they did.”