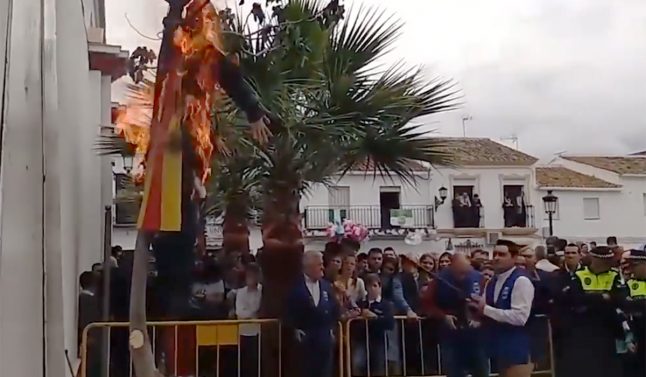 “I reject the terrible act against the figure of Carles Puigdemont in Coripe and the displays of intolerance which various candidates have fallen victim to in this election campaign,” Josep Borrell tweeted.

Every year on Easter Sunday, Coripe organises the fake execution of a figure meant to represent “what is negative for society”, which they call “setting Judas on fire.”

This year, several men, including municipal police, shot at an effigy of Puigdemont dozens of times, according to footage broadcast by Spanish media.

The real Puigdemont is currently living abroad in self-exile after fleeing Spain following a failed secession bid in October 2017.

The act of burning model figures of differing personalities is not new in Spain, where it takes place in high-profile and lesser-known traditional festivals.

But this time, the fake Puigdemont was “executed” as a tense, acrimonious electoral campaign rages ahead of Sunday polls where the future of Catalonia is a major issue.

The socialist mayor of Coripe, Antonio Perez, added fuel to fire when he defended his village's tradition.

“We make a figure that represents evil. What we're killing is evil. That's it,” he told reporters, before citing others who had been mock-executed in the past — “politicians, bankers, Arabs…”

On Twitter, Puigdemont, who is still wanted in Spain over his role in the secession bid, slammed the mock execution.

He said they were making “mockery of the struggle for the freedom of political prisoners and exiles,” in reference to jailed or exiled separatist leaders like himself.

On Monday, he thanked Borrell for coming to his defence.