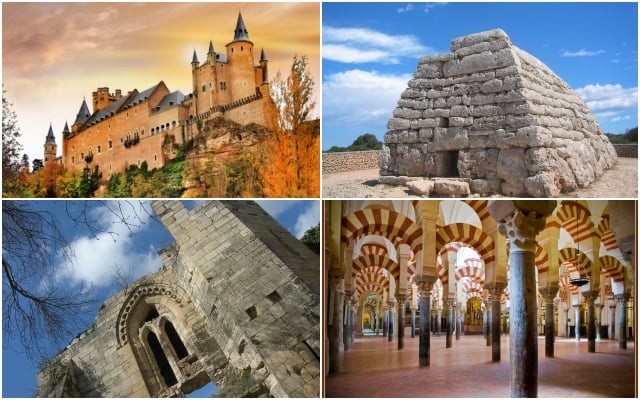 As the world mourns the destruction of France’s iconic Notre-Dame Cathedral, Spain’s Minister of Culture José Guirao has already announced that his ministry plans to review safety and preservation measures for the country's landmarks.

“This is a warning,” he told Spanish radio of the fire that destroyed Notre-Dame's fragile wooden roof, part of a structure that took two centuries to build (near completion was around the year 1260).

“The danger always lies in antiquated electrical systems which have to be reviewed.” Although the cause of the fire at the Paris landmark is yet to be confirmed, it’s clear that it only takes a twist of fate for centuries of history and heritage to crumble to the ground.

In Spain’s case, Roman and Visigothic rule, the Moorish occupation of Hispania for 700 years as well as the Reconquista and the Golden Age of the conquistadores has given the country some of the most varied architectural landmarks in Europe.

Here are ten of these ancient Spanish monuments that, whether they're currently cared for not, must be protected at all costs.

This ancient monastery in Retiendas in central Spain was bought by a private buyer in 1821 and since then it's been forgotten to the point that experts say it could collapse. The management team behind this imposing medieval fortress and UNESCO World Heritage Site have said that meteorological conditions mean the outer façade is in need of regular restoration.

3. Cathedral-Mosque of Córdoba, building began in 728

Although this breath-taking structure – both inside and outside – has overall been beautifully preserved, there are historical associations claiming its Moorish origins are under threat. It's now officially in the hands of Spain's Catholic Church, which to many experts has only meant that interest in using the building as a showcase of the city's rich heritage (Córdoba was under Moorish rule for more than 400 years) has been sidelined by the Catholic church's religious affairs. This majestic pre-Romansque church-turned-palace just outside the northern city of Oviedo is one the oldest structures in Spain. It has stood the passage of time relatively well but just 300 metres away, the just as old and similarly designed San Miguel de Lillo church, is in great need of restoration. 5. Hercules Tower, A Coruña, built during the 1st century

The world's only remaining Roman lighthouse is a proud landmark for residents of the Galician city of A Coruña. It's had to withstand millennia of bad weather and is in regular need of restoration. This remarkable megalithic chamber tomb on the Balearic island of Menorca may not be at risk of suffering an electrical fire but it has been vandalised and desecrated on several occasions. Originally built as the minaret for the Great Mosque of Seville during Moorish rule, the Giralda is the symbol of the southern city of Seville, and one that has to be preserved at all costs. The current restoration of its façade revealed it was originally painted red.

Quite possibly Europe's finest example of Moorish architecture, la Alhambra is well managed but is also a victim of its own success. Mass tourism has led management to address group numbers to curb the wear and tear that comes from overcrowding. A place of pilgrimage for more than 800 years, the beautifully ornate structure in northwestern Spain has just undergone 50,000 hours of restoration. Commendable work done to preserve Spain's incredible heritage.

Admittedly Gaudí's iconic church is not as old as all the other buildings on this list, but the architect's unique design receives million of visitors every year, despite the fact that it appears to be constantly undergoing restoration work (Gaudí never actually managed to complete it).