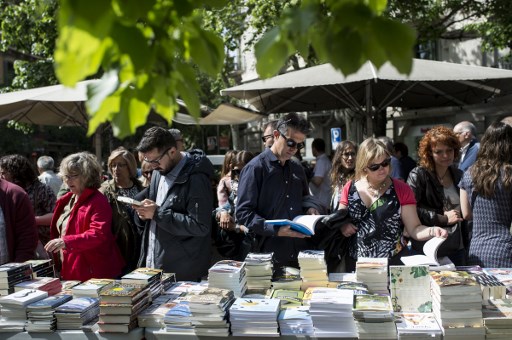 (Scroll down for book recommendations)

What is Sant Jordi in Barcelona all about?

Let’s take it one step at a time and piece the story together. After all, it took centuries to form so you can be forgiven for not connecting the dots straight away.

The Golden Legend dates back to the thirteenth century and tells the story about a venomous dragon that lived in a pond near to the city of Silene, now Libya.

The people of Silene decided to keep the dragon away from their city with daily offerings to keep it fed and avoid it coming too close in search of food.

To keep the dragon at bay these offerings, starting with sheep, soon became insufficient so they held a lottery to choose the men and eventually children who would be sent out to their peril with the dragon. The original Hunger Games, you could say.

One day, this lottery drew the name of the King’s own daughter. The King offered the people of Silene all of his gold and treasure to save his daughter but, having already had to see their own children fed to the dragon, they did not accept his money. So the young princess was taken out of the city, abandoned shackled to a tree and left to await her fate.

As darkness fell, the dragon crawled out of the nearby pond where it lived when all of a sudden a young man appeared on horseback.

The princess told him to run away and save himself but he refused, vowing to remain with her. With the dragon approaching, the stranger made the sign of the cross and charged at the dragon in a remarkable act of courage and bravery. With all his might he speared the dragon with his lance, seriously wounding it.

That stranger was Saint George.

With the beast wounded, it was tied up and led back to the city of Silene. Though relieved the dragon had been wounded, the people of the city were still terrified and insisted it be killed. Saint George consented to slay the dragon provided the entire population of Silene converted to Christianity and be baptized. That day fifteen thousand people converted their faith and, as promised, Saint George killed the dragon. The Golden Legend is the main source of the story of Saint George and the dragon, that was received in Western Europe.

The courage of Saint George led to him being named patron saint of England as well as the regions of Aragon and Catalonia in Spain, where his patronage is celebrated on 23 April. Each region celebrates Saint George in their own way. The English named their national flag, The George Cross, after him. However, the English Rose is not the rose connection we are looking for.

The region of Aragon adopted Saint George as their patron when King Pedro I of Aragon won the Battle of Alcoraz. It was said that Saint George appeared to them whilst fighting on the battlefield as they attempted to recapture the city of Huesca that had fallen under Muslim control.

The Cross of Saint George, also known in Aragon as The Cross of Alcoraz, can still be seen on the flags of all of Aragon’s provinces. The historians among you may be thinking that this article doesn’t quite add up at this point.

Why so? Well the battle of Alcoraz took place in 1096, so how could they have seen Saint George when the Golden Legend wasn’t until two hundred years later in the thirteenth century. Let me clarify.

The Golden Legend was a hagiography, a biography of a saint or an ecclesiastical leader (I had to look that up!) comprising a number of saints of which George was one. Not much is known about the life of Saint George, but according to the Golden Legend he died in 287 A.C. This means that his legend most definitely preceded the Battle of Alcoraz by many centuries. Ok, history lesson over. Catalonia also adopted Sant Jordi as its patron saint so his cross appears on many buildings and local flags, including the flag of Barcelona. However the legend as told in Catalonia differs to the version above in that, according to Catalan tradition, Sant Jordi lived in the town of Montblanc near Tarragona.

On a visit to the region of Catalonia on 23 April you will find yourself surrounded by stalls selling… roses! This day is also called “The Day of the Lovers” in which men give a rose to their sweetheart in memory of Sant Jordi, who rescued the princess from the dragon. According to the myth, the blood spilled from the dragon grew into a rose that Sant Jordi gave to the princess as a symbol of love and friendship.

And now for the final piece of the puzzle. So what have books got to do with all of this? Well it wasn’t until some time later, in 1923, when the booksellers of Barcelona needing to recover the recent trend of declining book sales decided to sell books on the streets alongside the stalls of roses on 23 April.

But why on the day of Sant Jordi? The final connection for our tale lies in the date that two of the most famous authors in the history of literature died. Over three hundred years previously, on 23 April 1616, William Shakespeare and Miguel de Cervantes both died on the same day. This was enough to have the booksellers of Catalonia taking to the streets selling books alongside the flower stalls full of roses. The tradition of men giving a rose to their sweetheart evolved into a rose for the girl and a book for the boy. “But I want a rose”, said the boys! “And I want a book”, said the girls! So nowadays, either a rose or a book (or both) are given as a gift to the one you love.

So did the plan work? Yes the booksellers’ plan most definitely worked. It is reported that about 1.5 millions books are now sold in Catalonia on 23 April each year. In fact, it was for the very same reason, the deaths of Shakespeare and Cervantes, that in 1995 UNESCO declared 23 April, World Book Day.

Here are some recommendations for books set in Spain along with some of the bestsellers on MadRead at the moment.

A Vineyard in Andalucia by Maria Dueñas: A historical novel of glories and defeats; of silver mines, family secrets, vineyards, cellars, and splendid cities of faded grandeur; of unexpected passion, and love in the strangest of circumstances. Maria Dueñas transports the reader to a faraway time, following Maura Larrera on the greatest adventure of his life.

In the Night of Time by Antonio Muñoz Molina: A rich, panoramic portrait of Spain on the brink of civil war, In the Night of Time details the passions and tragedies of a country tearing itself apart. Compared in scope and importance to War and Peace, Muñoz Molina’s masterpiece is the great epic of the Spanish Civil War written by one of Spain’s most important contemporary novelists.

Thus Bad Begins by Javier Marías: Award-winning author Javier Marías weaves a darkly thrilling tale of love, betrayal and lives played out in the unhappy shadow of history. This novel follows Juan de Vere’s first assignment as he investigates Dr Jorge Van Vechten and his wife Beatriz in the years when Spain awakens after Franco’s death.

Happy as a Partridge by Kate Boyle: Something a little lighter that perfectly reflects the true spirit of the Festival of Sant Jordi. Evie Fuller is on the trail of life and love in Madrid. Moving away from London, Eva makes a fresh start, whilst adapting to the rhythm, culture and language in the Spanish capital. See the city from a fresh pair of eyes and follow Evie on her adventure.

The Shadow of the Wind by Carlos Ruiz Zafón: At the first light of dawn in postwar Barcelona, a bookseller leads his motherless son to a mysterious crypt called the Cemetery of Forgotten Books. The Shadow of the Wind is a coming-of-age tale of a young boy who, through the magic of a single book, finds a purpose greater than himself and a hero in a man he’s never met.

Educated by Tara Westover: An account of the struggle for self- invention. It is a tale of fierce family loyalty,and of the grief that comes with the severing of the closest of ties. A truly remarkable memoir.
Twisted by Steve Cavanagh: The new standalone novel from bestselling author of Thirteen, Steve Cavanagh. A crime writer whose words have gripped the world – and who keeps his identity under wraps – may have been discovered, but the forces closing in around the enigma are set to uncover a more complex truth.

Vox by Christina Dalcher: Set in a United States in which half the population has been silenced, Vox is the harrowing, unforgettable story of what one woman will do to protect herself and her daughter. Strangely addictive, for fans of the Handmaid’s Tale.

A Ladder to the Sky by John Boyne: From the bestselling author of The Boy in Striped Pyjamas. You’ve heard the old proverb about ambition, that it’s like setting a ladder to the sky. It can lead to a long and painful fall. This is a novel all about ambition.

Adam García is the founder of MadRead, an online book store dedicated to English books that offers free delivery to anywhere in Spain.

You can get 10 percent discount off your first order with them by signing up to their newsletter.