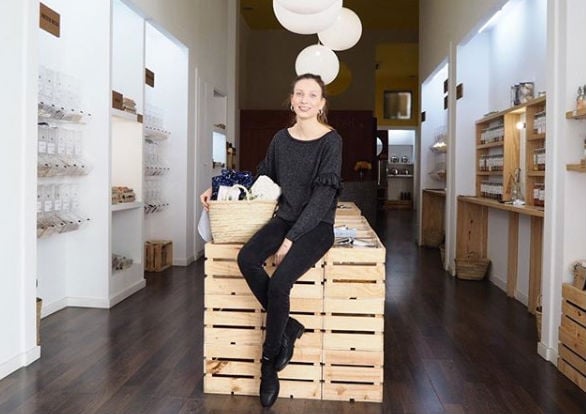 Maria Ariás in her store at Calle Narvaez, 28. Photo: unPackedshop.es

In the upmarket district of Salamanca, just a few minutes walk from the Retiro park on Calle Narvaez, is a store that wants to revolutionize the way Madrileños shop: This is unPacked, the first zero-waste shop in Madrid.

In September after a year and a half of planning, María Arias, the founder and owner, finally saw her project come to life: after obtaining a law degree and working in different sectors, Arias's life felt unfulfilled, so she decided to make some changes.

“I was working for Real Madrid but I was super unhappy and I thought that my life was going nowhere. I decided to make some changes in my daily life and get informed about environmental issues,” she said.

The reasons behind unPacked’s opening were that she wanted to offer a place where people could do their groceries in an eco-friendly way and, at the same time, wanted to promote a greener way of consumption. unPacked’s philosophy is to urge its clientele to consume zero-waste, with people being encouraged to bring their own Tupperware and totes when they buy their groceries.

At unPacked you can buy almost anything: from legumes and dried fruit to kombucha – a fermented mushroom drink -, beer and even toothbrushes. All the products, biodegradable and recyclable, are stored in glas display cases and customers are not given plastic bags but help themselves using their own recepticles – or they can buy recyclable ones.

unPacked is not the only shop that adopted a green philosophy: last month the Carrefour chain announced it would allowed customers at selected stores to bring their own Tupperware to cut down on waste.

READ MORE: 'Bring your own Tupperware': Carrefour tells shoppers in fight against plastic

Moreover, in the capital there are other shops, like Pepita y Grano in Chamberí and Alcobendas, or the Acre, Mercado Amish in Malasaña that promote a greener trade.

“What makes unPacked different and new is that we also sell vinegar, oil and cleaning supplies that are biodegradable,” insists Arias.

Arias's dedication to zero-waste is more than a philosophy, it's a way of life: she includes it in the way she approaches commerce, by favouring the recycling of materials and getting her goods from green companies. She believes having zero-waste shops are the way forward because “we see it in the news every day and people are getting more and more informed about plastic pollution”.

According to a report, published by the EAE Business School in September 2018, in Spain, only 43.3 percent of waste produced is recycled, setting the country more than 8 points below the EU average of 52 percent.

Arias thinks that both governments and people need to do their part if we want to avoid an ecological catastrophe.

She really believes that small actions can make a big difference: “I think there are small things that people can do, starting for example from carrying a tote bag to carrying reusable bags when doing the groceries – these are really easy changes and everyone can do them,” she said.

She also thinks that, even though her government should focus more on tackling environmental issues – hardly any party, she says, is mentioning the environment in their campaigns for the upcoming elections – change is already happening. “If more people start demanding change, there will be one,” she said.

Spaniards are traditionally familiar with low-waste shopping: the old Spanish way of buying food was to go to the local market or traditional family run shop, where products would be given in brown paper bags, if at all and carried home in shoppers.

In more recent years, though, the way Spaniards shop has dramatically changed: data, provided by the consultancy firm Nielsen, suggests that, in the last 30 years, more than 70,000 traditional shops have disappeared, while supermarket and hipermercados have multiplied.

HEALTH
Madrid raises age limit for women to have free IVF up to 45
Url copied to clipboard!