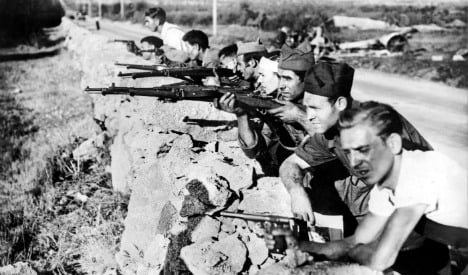 A dark prelude to World War II, the conflict unleashed passions around the world for close to three years and led to a decades-long dictatorship.

It all started on July 18, 1936, when army generals staged a coup against a fledgling republic that had been established five years prior in a restive, poor country.

The coup failed but divided the country between those who supported the Republic and the “nationalist” rebels.

He promptly gained the support of German and Italian dictators Adolf Hitler and Benito Mussolini, whose planes transported troops onto the mainland in what is known as the world's first major airlift.

The planes would go on to regularly bomb cities around the country, and destroy the town of Guernica in the Basque Country, made famous by Picasso's haunting painting. For the first time, civilians were direct targets.

The fighting and violence were reported around the world. Thanks to new portable cameras the war was “the first to be witnessed (…) by a corps of professional photographers at the lines of military engagement and in the towns under bombardment”, American writer Susan Sontag, who also wrote about photography, said in The New Yorker.

On the ground, mayhem.

“We must create an atmosphere of terror… by eliminating all those who don't think like us without any misgivings or hesitation,” rebel general Gonzalo Queipo de Llano called in a radio address in July 1936.

As the rebels progressed, left-wing lawmakers, unionists, Socialist activists, supporters or their families were executed in their thousands.

On the Republican side, armed gangs chased the wealthy and those suspected of being on the side of the rebels were executed.

Some were taken away at night for a “walk”, a car ride from which no one ever returned.

Priests and nuns were also targeted for their perceived closeness to upper classes, and more than 6,500 were killed, most at the hands of Republicans. Madrid asked its neighbours for help, in vain. Britain and France refused, scared of being dragged into another world war.

They opted instead for a “pact of non-intervention” to which Italy and Germany also signed up, even as they continued to openly help the nationalist rebels.

The conflict moved people the world over.

With the inaction of Western democracies, intellectuals took the side of the Republic, from novelist John Steinbeck to India's Nobel Literature laureate Rabindranath Tagore.

The civil war had evolved into a clash between fascism and communism.    “Our foes are the Reds, the Bolsheviks of the world,” sang the young pilots of the Condor Legion sent by Hitler.

Soviet dictator Joseph Stalin jumped on the occasion to strengthen his influence, sending advisers and organising International Brigades. Some 50,000 volunteered from all over the world.

“They saw fascism as an international threat, and the Brigades appeared to offer the best way of fighting it”, writes historian Antony Beevor.

They helped the Republic score rare victories, holding onto Madrid in a winter 1936 battle or defeating Italian brigades sent by Mussolini in 1937.

But militarily inferior and weakened by divisions, the Republic slowly lost ground and the Barcelona-based government eventually went into exile in March 1939 along with some 400,000 Spaniards.

Spain yet to heal

Back in Spain, Franco declared victory on April 1st, 1939 and ruled Spain until his death in 1975. In his book “The Spanish Holocaust”, historian Paul Preston calculates that 20,000 Republican supporters were executed after the war.

Franco's regime paid tribute to its dead, but those who died on the opposite side were largely forgotten and dumped in mass graves.

When Spain transitioned to democracy after his death, authorities opted for a “pact of forgetting” to put the past and its bloody divisions behind.

Then in 2007 as more and more people clamoured for the war and its aftermath to be addressed, Spain passed a law to help relatives willing to exhume and recover the remains of loved ones.

Since then local groups under the umbrella of the Historical Memory Association (ARMH) have laboured to discover unmarked graves, exhume those within them and return them to their relatives.

Tens of thousands are estimated to lie in unmarked graves across Spain, including the poet Federico Garcia Lorca who was killed by Francoist gang in the hills outside Granada in 1936.

READ MORE: Why some of Spain’s Civil War survivors are still waiting to recover lost relatives An archaeologist works to exhume an unmarked grave dating from the Civil War. Photo: AFP

Pedro Sanchez made it a priority when he became Prime Minister in June 2018 to remove Franco from his tomb in the polemic Valley of the Fallen monument in the hills outside Madrid and turn the place into a center for reconciliation.

But although the exhumation of the late dictator is set for June, the general election on April 28th could see it overturned if the socialists fail to hold on to power.